Time to Meat Your Maker 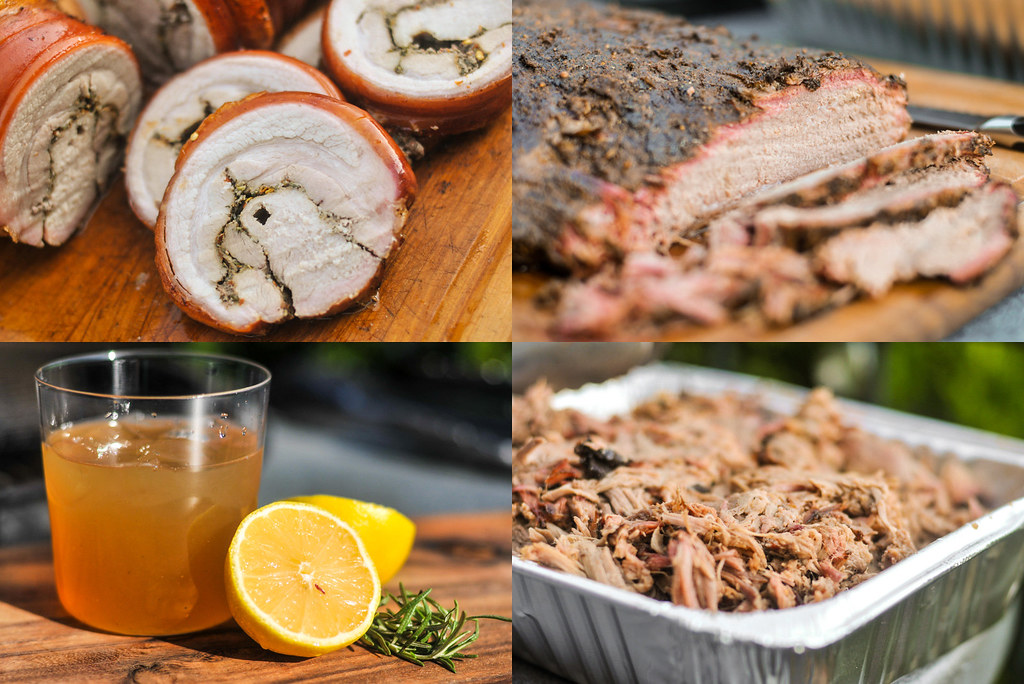 It happens every year, but it doesn't mean it ever gets any easier—the end of the Meatwave season. In looking back, this was truly the greatest year for the Meatwave. Not only did we start our adventure as a competition team, but on our home turf we had the most people, the most new faces, and more meat than any previous year. Yeah, it was an awesome (and exhausting) season, full of grand achievements and much loving support from my meaty minions, so for the final Meatwave of 2012, I thought it only right to cap it off with a massive meat blowout consisting of Meatwaver favorites. 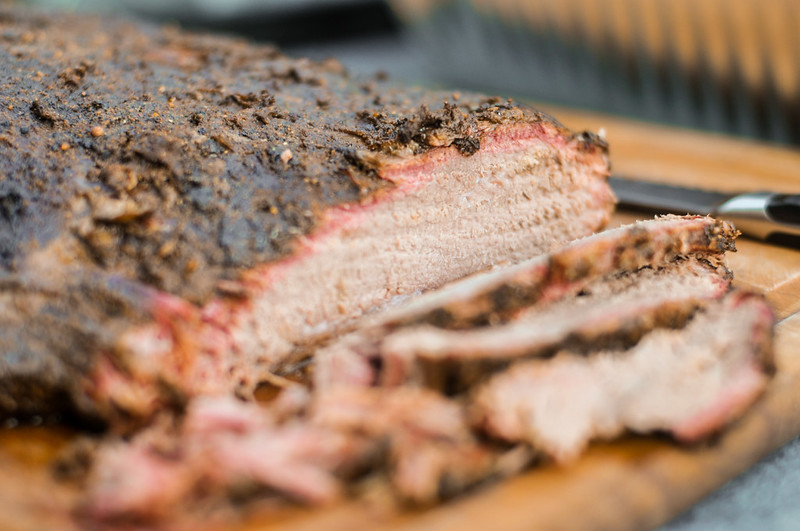 Luckily there's overlap between "favorites" and the items I need to most practice for competition, none more so than brisket. It's kind of maddening that the hardest thing to cook in barbecue is also the most expensive, so while I had an audience still available to help eat a thirteen pound chunk of beef, I made an attempt to up my brisket skills. I stuck with the same rub and injection recipe I've used so far in competition, but changed up the cooking process, altering the times at which I foiled the brisket and how I held it afterward. This resulted in a much improved texture, but still not quite right. I'd imagine this one would push me to the top half in competition, but I'm gunning for that number one spot, so there's still much work to be done. 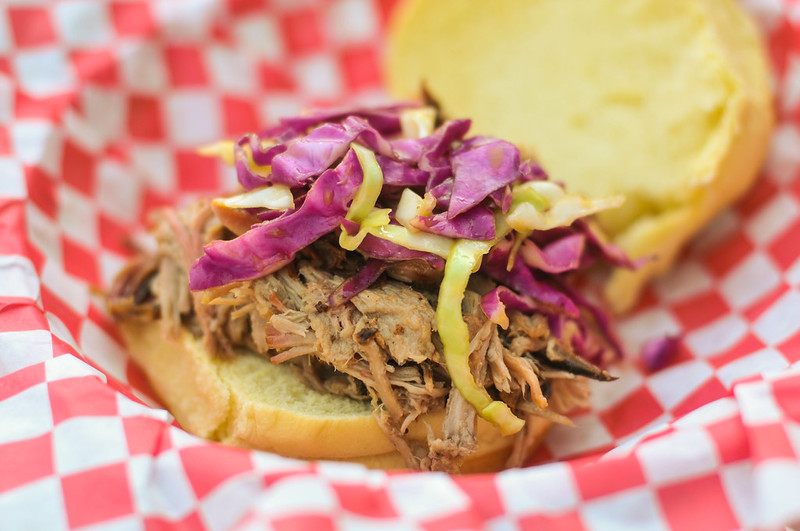 Surprisingly, what I considered to be one of my strongest strengths in competition had ended up being my weakest link—pork butt. Since Meatwavers usually rejoice whenever I make pulled pork, I thought it was also apt to throw a butt in with the brisket and try out a new competition recipe. Here I changed up a lot in my recipe including the injection, braising liquid, and cooking method. What I came out with is something that should surely push me up more than a few notches in the rankings. My usually tangy and spicy pork was now more sweet and savory (to appease the judges' preference to for sweet meat), and while previous porks dried out somewhat quickly after being pulled, this one stayed juicier, even when sitting out in a cool temperature. It made for a great sandwich, which got even better when topped with the vinegar slaw provided by Tyson. 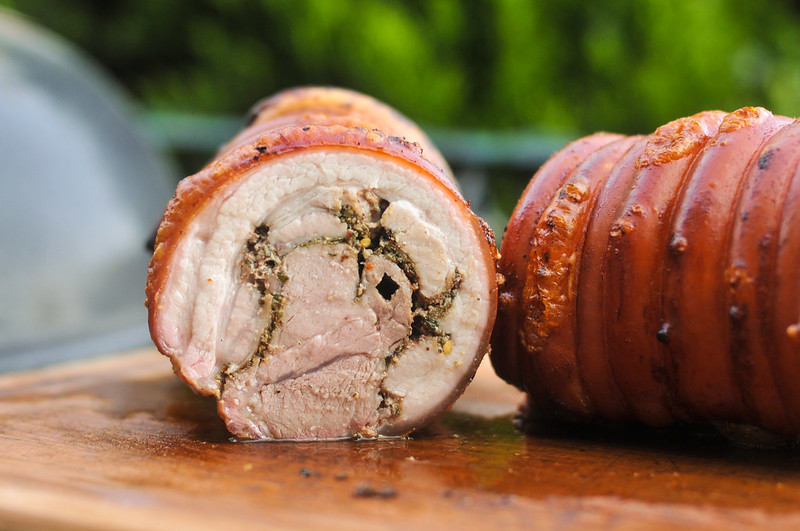 It's hard for me to do a Meatwave without cooking at least something new, so I let the influence of a popular lechon liempo—Filipino rotisserie pork belly—earlier in the season lead me to make this porchetta. A seven-pound piece of pork belly was scored and rubbed with a fennel and herb mixture. It was then wrapped around a brined pork loin, put on the spit, and cooked until the skin crisped. Outdoing the lechon in my opinion, this had a great spicy herbal kick to go along with the fatty meat and crackling skin. 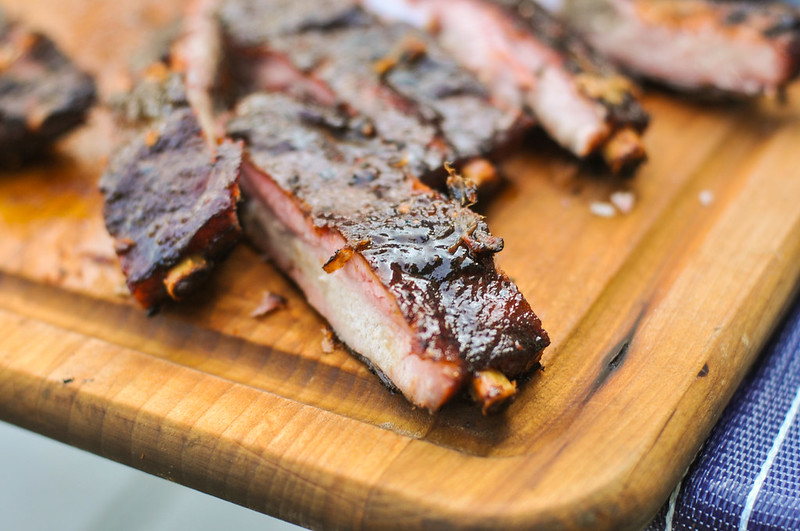 My giant piece of pork belly came with some ribs still attached, which I sliced off and threw in the smoker. Nothing fancy here, just my basic rub and sauce, and about six hours of smoking. They served as a small interlude between the pork and the porchetta. 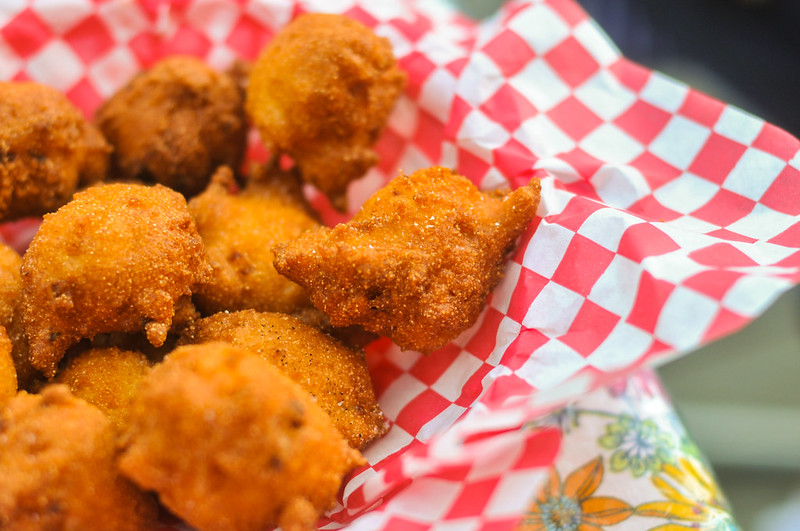 I haven't been doing a lot of frying this summer, so I decided heat up a large pot of oil and make some Meatwaver favorite fried sides. To go with the pulled pork, I was required by barbecue law to start with hush puppies. Having just come back from a trip to North Carolina, where hush puppies were on the plate of at least one meal each day, I can confirm that my recipe still stands as one of my favorites for it's light and airy texture, with just the right amount of cornmeal flavor. 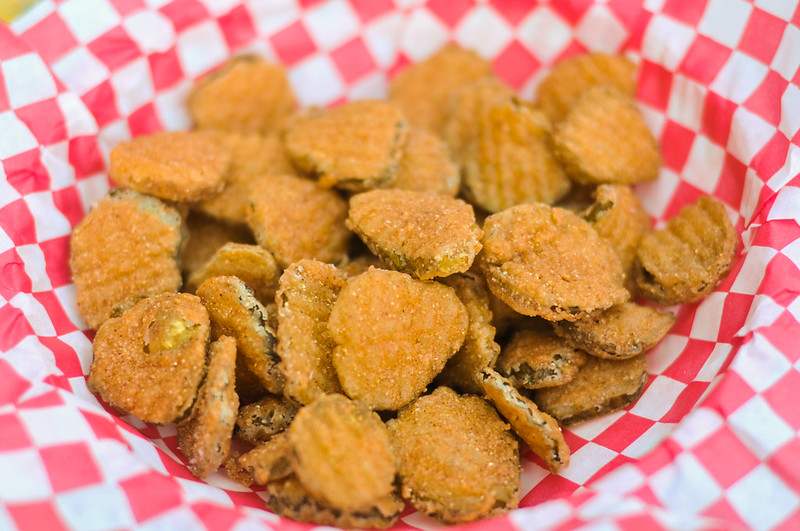 The next thing fried to golden deliciousness were dill pickles. These are so simple and never fail to please, especially with a little ranch on the side for dipping. 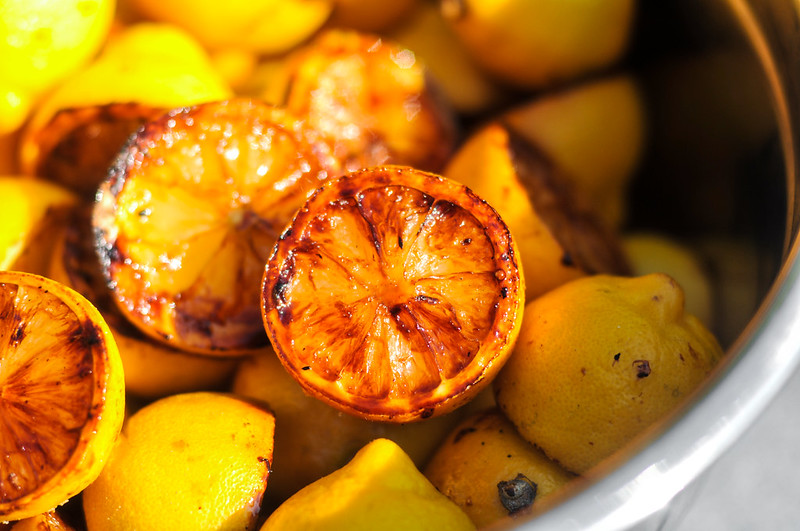 For drinks, I made a batch of grilled lemonade, which I learned as a student at Kingsford U. To make this, an assload of lemons were halved, dipped in sugar, then grilled until browned. These were squeezed and added to a simple syrup of honey, sugar, water, and rosemary. The end result was a lemonade like none I've ever had before, and it only got better with a little whiskey added into the mix. 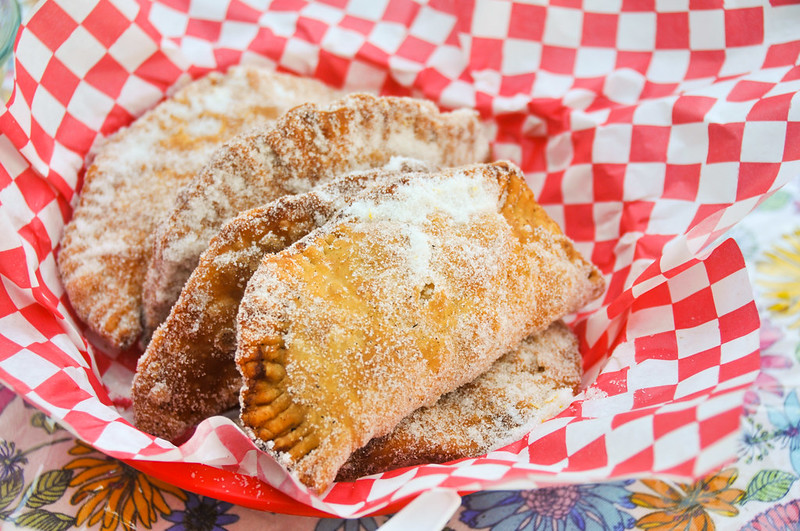 While we had the oil going, the wife made these amazing fried pies. A thick strawberry filling was encased in dough, fried to perfection, then tossed in an orange sugar. By the time these hit the table, we had all collectively eaten through about fifteen pounds of meat, but that didn't stop anyone from the immense draw of these incredible hand pies. 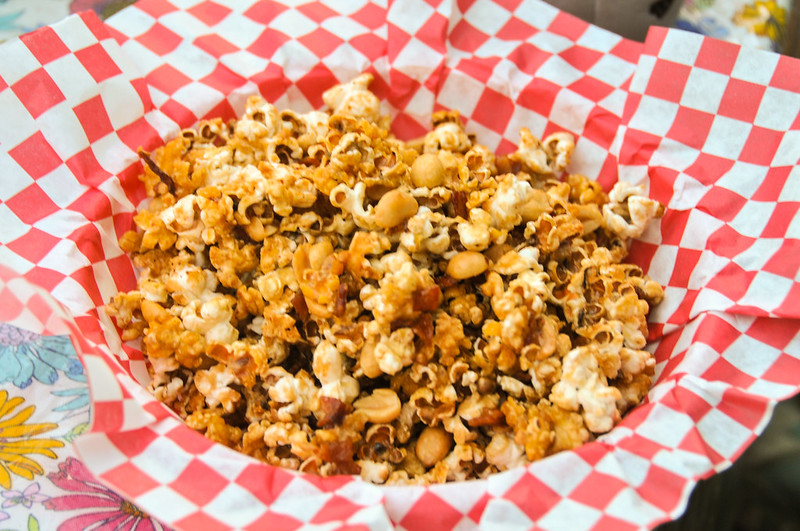 I was sure I couldn't fit one more thing in my stomach as the sun started to set, but Anna proved me wrong when she showed up with this carmel corn that included items like peanuts, bacon, and whiskey. So addictive. 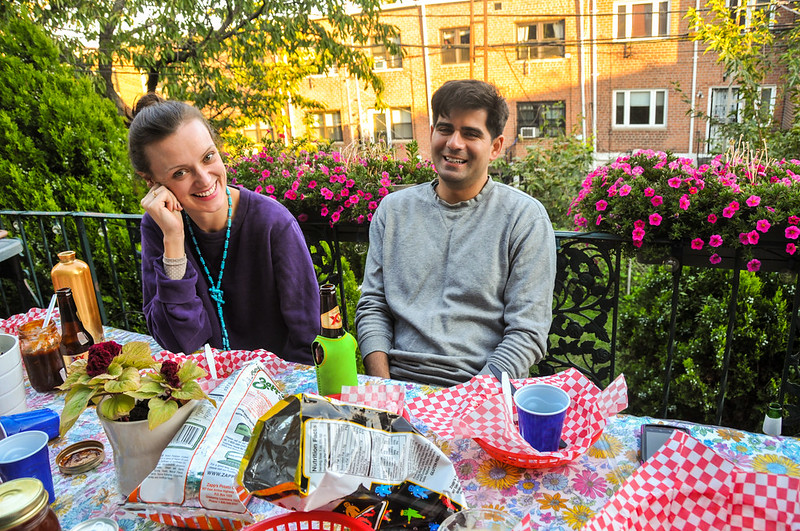 The attendees of this Meatwave get extra props. With my open door policy, I never quite know what to expect each week. Sometimes I'll be expecting ten people and then twenty ore more show up. Other times it's the opposite, which is how it played out this week. So while I had meat for nearly thirty folks, this small unit of eight dedicated Meatwavers ate through at least half of that. Doing their part were Suzun and Aldo, who also came with a fantastic apple cake which I regretfully forgot to photograph to give it proper recognition. 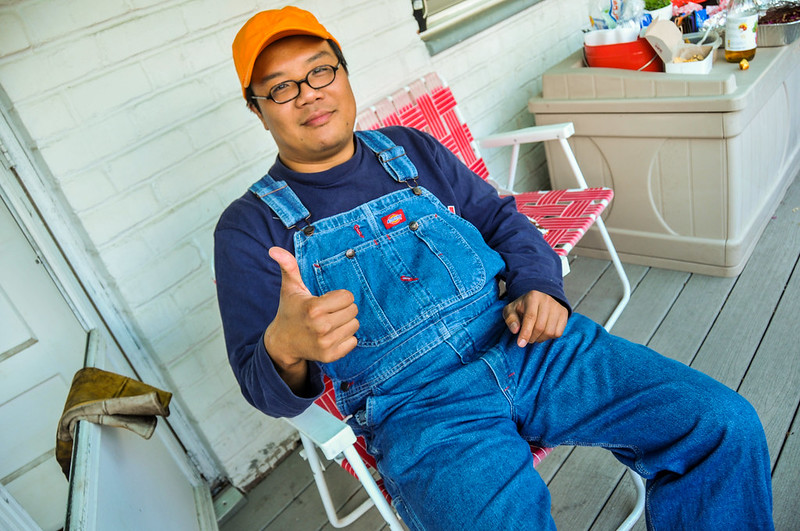 Tyson has been one of the best additions to the Meatwave this year, not just for the great company and even better barbecue, but because he's one man who cooks in an excess that even I find impressive. So far this year he's brought seven racks of ribs, four pork shoulders, two pieces of pork belly, a brisket point, and, this week, enough coleslaw to feed an army. Hats off to Tyson for his tireless efforts in expanding the Meatwave and our waistlines. 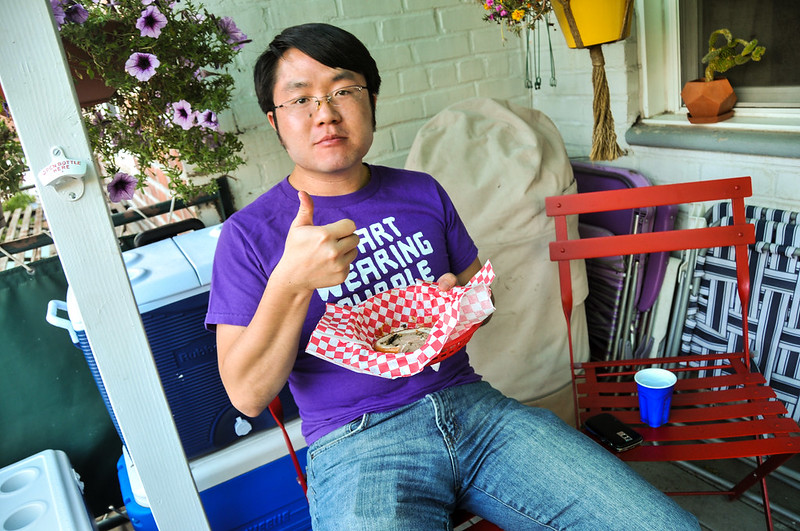 Giving a second thumbs up is Meatwaver Chris. While Tyson might be the king of cooking, Chris is the king of eating. I was incredibly impressed after watching him have brisket, pulled pork, porchetta, then go back for more porchetta, and finally be the first to grab a pie when they were out of the fryer. This a process I see Chris repeat week after week, making him a super-Meatwaver in my book. 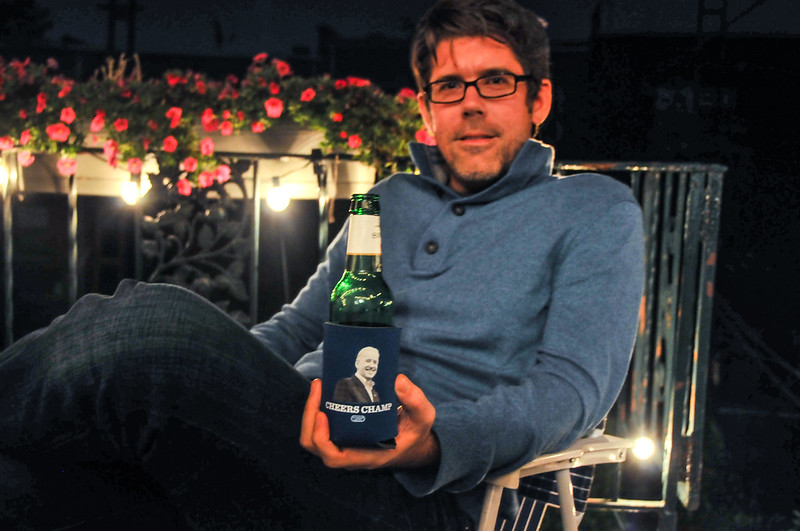 Finally, we have Matt, whom I owe an apology. Matt has become a regular at the Meatwave, and we're super happy about that, but it's also brought on a contentious fight to be the Foursquare Mayor of Meatwave. He out-seated me early in the season, then it went back and forth between my wife and Matt. Finally, wanting to take the reigns of Mayorship at the end of the season, I unfairly checked-in early and regained my (rightful) place at the top. It was back-handed and unjust, I know, but Matt had Joe there to help ease to pain.

So there we have it, an amazing end to a fantastic season. I should take a little break now, but can't help but already start planning the schedule for next summer (I'm taking naming suggestions), which I hope will be even bigger and better to celebrate our tenth year!