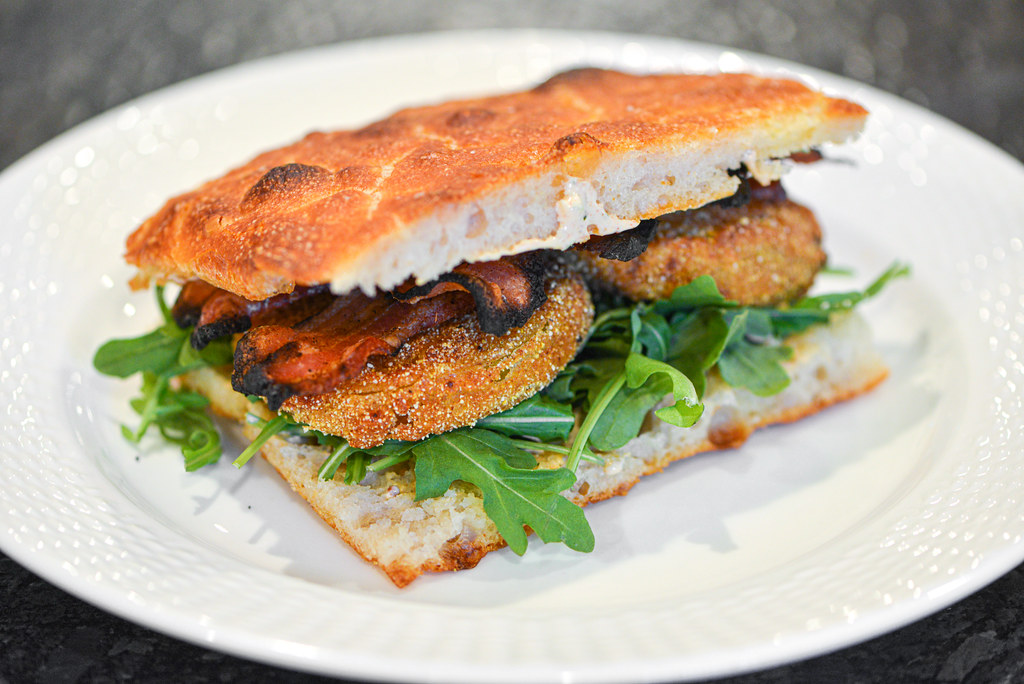 During these quarantine times, I came to the realization that I had never made fried green tomatoes at home. That wasn't due to a lack of interest—I love these tangy, juicy, and crunchy underripe tomatoes—but upon reflection I concluded that they never happened due to green tomatoes being hard to come by while I was still in NYC and then when I moved to NC, fried green tomatoes were so ubiquitous that I ate them often enough that I had no desire or need to make them at home. After an extended period of almost exclusively cooking at home, I had a hankering for these tomatoes and decided it was time to try my hand at making them, and that's how I got myself to these fried green tomato BLTs. 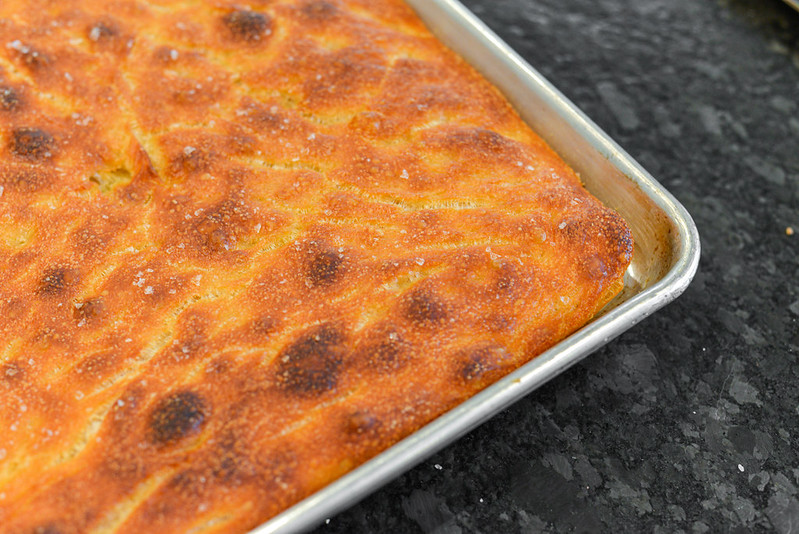 While I have cooked new things almost daily during this pandemic, I never really took up the bread baking I saw most of my friends using their time to do. On this particular weekend though I tapped into my strategic bread flour reserves and tried my hand at making focaccia, which has been on my perpetual to-do list for a long time. I settled on Bon Appetit's well regarded recipe, and while that recipe nailed the right flavor and texture of focaccia, I ran into extensive sticking which frustratingly left large portions of bread firmly attached to the pan when I tried to remove it. Still, I had enough salvageable focaccia to make two sets of sandwiches plus more for snacking. 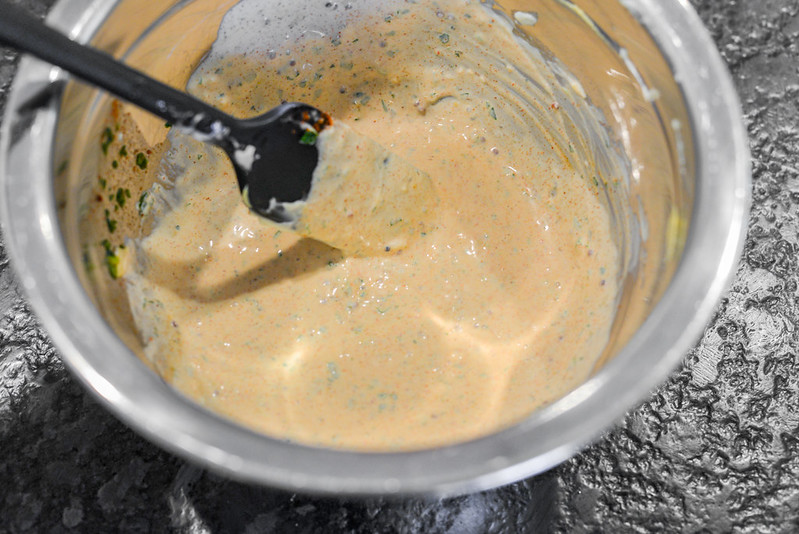 I always appreciate a dip with my fried green tomatoes, and there's none I like more than a remoulade. The heat, tang, and creaminess of a great remoulade is the perfect paring to the tart green tomatoes for my taste buds, and luckily I devised a remoulade recipe years ago that I've consistently been able to rely on to make a top notch specimen and it performed well yet again in these sandwiches. 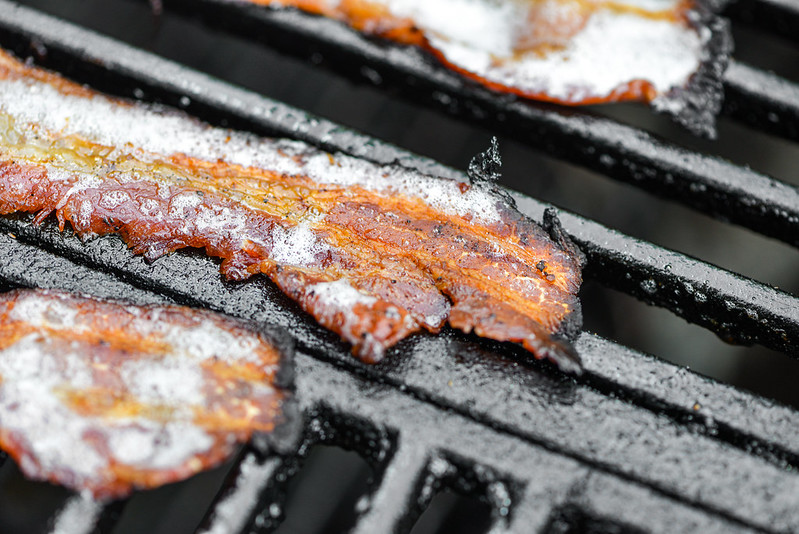 Now this isn't a grilling recipe per se, and making this sandwich start to finish without a grill is a more natural procedure, but if you're making the full four servings, the grill is definitely useful to cook the entire batch of bacon needed in one fell swoop. I utilized my extra-tasty maple-cured bacon for these sandwiches and cooked it over high, indirect heat. In about ten minutes, with some flipping of the bacon as needed, I had the large batch of perfectly crispy strips needed for the sandwiches. 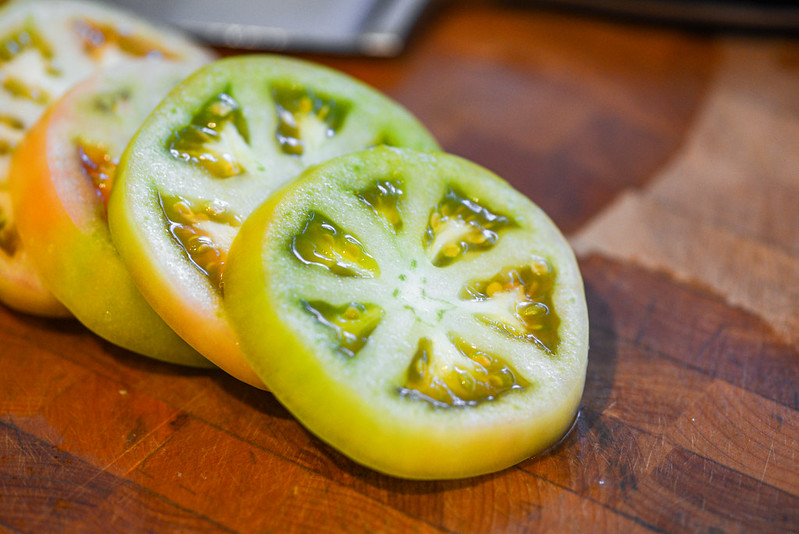 Not having made fried green tomatoes, I actually never looked for green tomatoes in the supermarket before, but with no surprise, there was a section for them in the produce aisle that was well stocked even while other areas of the grocery store were half bare. I wasn't sure how many tomatoes I would need, so picked up four, then cut each into three half-inch slices. I ended up needing only two slices per sandwich, so I had a lot of extra in the end that I enjoyed with fork and knife. 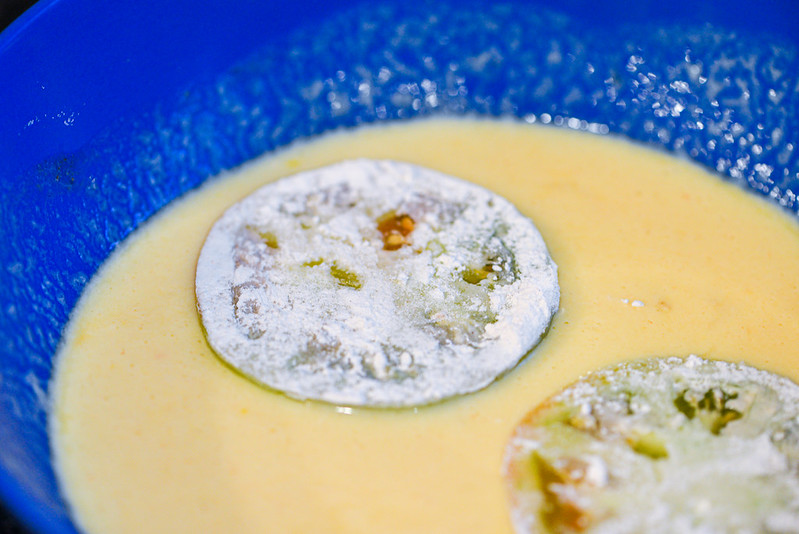 I took the standard approach to battering that began with tossing the tomato slices in plain flour and then shaking off the excess. The initial flour coating is important because it gives the next step of an egg wash something cling to. My egg wash is usually just some eggs beaten with water, but to compliment the flavor of the tomatoes, I mixed the eggs with buttermilk and a little hot sauce for this application. 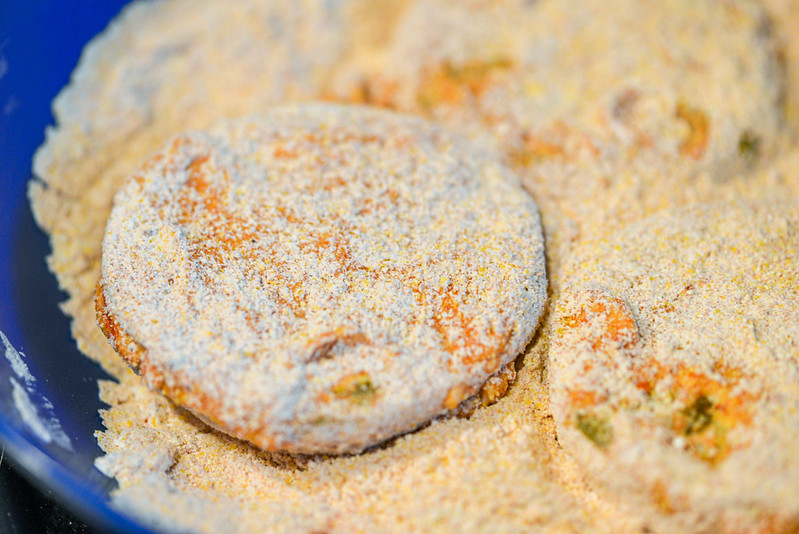 The breaded coating was my only real conundrum in this recipe—do I go with an appropriately Southern cornmeal crust, or an extra-crispy panko coating that would lend more crunch to the final sandwich. Thinking back to another tart fried recipe I developed—fried pickles—I used a seasoned cornmeal and flour coating whose corny flavor worked out really well, so I went with what I knew worked in the past and took the cornmeal approach. 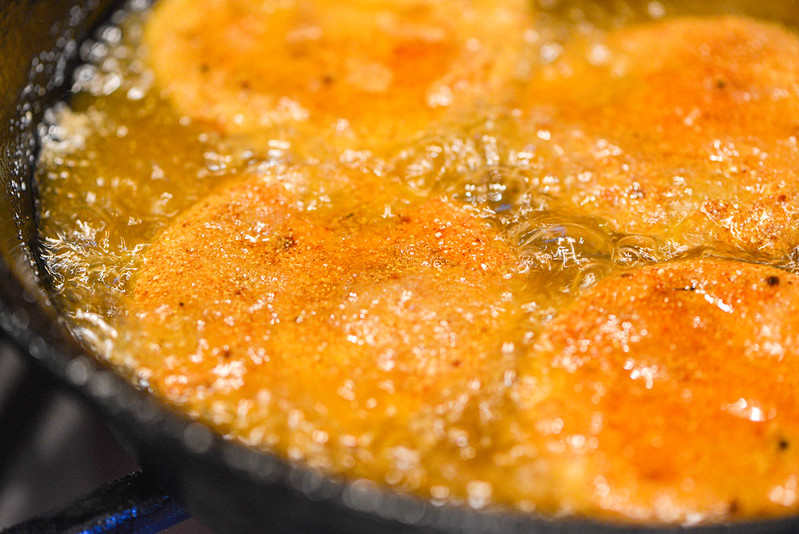 Being new to fried green tomato making, I fried an initial small batch of two tomatoes to see how long they would need to cook. My assumption was that once both sides were well browned, the innards would be soft and juicy, but the green tomatoes were so firm that I questioned if that logic would translate to the desired results. It took around two minutes per side in 375°F oil for the tomatoes to turn a deep golden brown, and after a little rest I confirmed the insides were indeed as desired. If anything, it was the exterior that could have used more time to gain a little extra crispness, so I actually upped the cooking time to three minutes per side in subsequent batches. 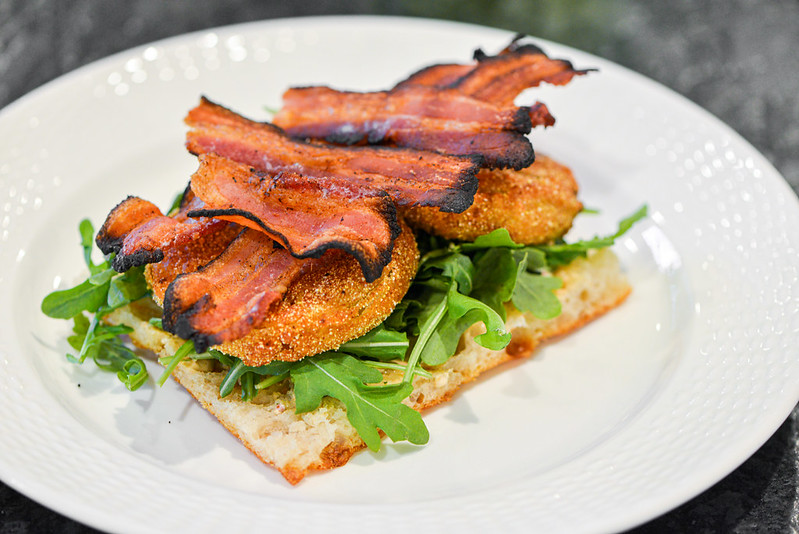 With all the components of the sandwich done, it was time for assembly. I started with generously applying the remoulade to the sliced focaccia that I had briefly toasted to warm up. Then I piled on a layer of arugula, which I know is not normal BLT fodder, but these were not normal BLTs and I wanted that strong peppery flavor that could hold its own against the tomatoes, bacon, and sauce. Two tomatoes topped each sandwich next, followed by the bacon. 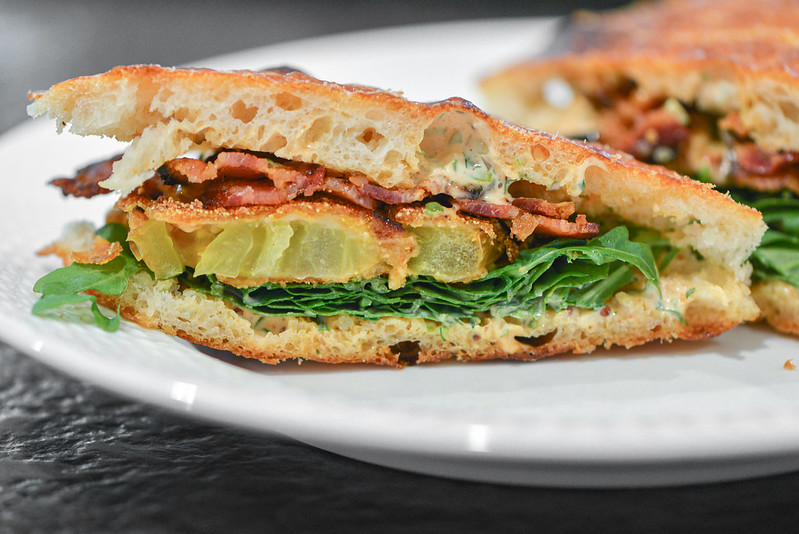 BLTs are not my favorite sandwich, and I often leave their consumption to the couple months a year when tomatoes are in their prime, but this fried green tomato BLT has my full, enthusiastic support anytime of year. Big flavors speak to me, and this sandwich had a lot without tasting overboard. The remoulade and green tomatoes were the primary hitters and delivered a strong tart and spicy flavor that was enhanced by the juiciness of the tomatoes and crunch of their crust. Unlike the usual iceberg lettuce used in BLTs, the arugula didn't do much in terms of texture, but its peppery flavor was the right addition for these sandwiches, while the bacon did its glorious thing per usual. I was really digging the focaccia as well, whose extra heartiness compared to white bread was a good match-up here—I was only left questioning whether a sandwich that already had multiple layers of fat needed an extra-oily bread. So now I've finally made fried green tomatoes at home, and they were delicious, but I'm looking forward more to the day when they're a regular part of my life again because I'm finally able to eat out with no fears or reservations. 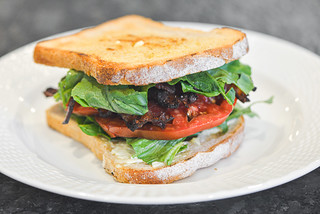