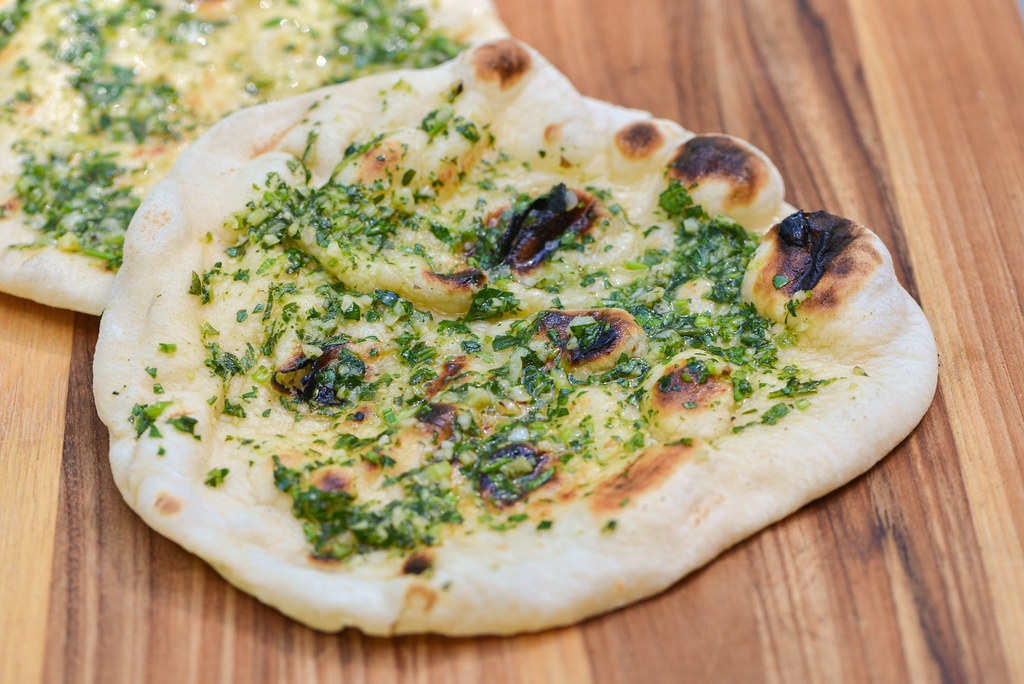 I really love za'atar bread, like a lot. I make the recipe that's on this site pretty regularly, and whenever I see it on a menu, I can't help but order a side of it. The combo of tender and warm fresh bread along with the herbal, citrusy, and nutty za'atar is an ultimate pairing in my mind. During a recent grilling session, I really wanted to grill up a batch of this bread, but that za'atar flavor wasn't going to be as fitting in the context of being served with a mango salad and jalapeño-lime chicken skewers, but I so wanted it that I decided to still make the bread recipe, but just gave it a different finishing seasoning, and what came out was different enough, and delicious enough, to share out as its own post. 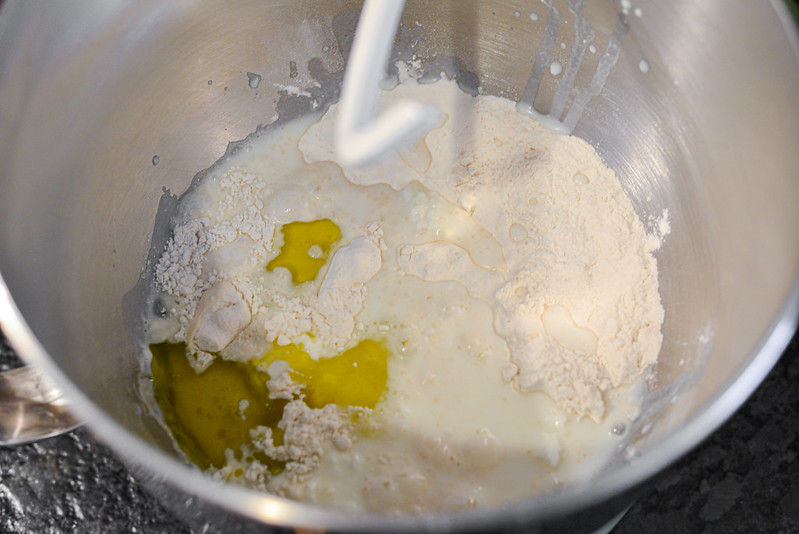 The base bread recipe I got from Serious Eats and it makes for a pretty tasty flatbread on its own. Comparing it naan—another flatbread reference most people will be familiar with—it has a similar light tang if you opt to use yogurt over milk for the liquid, but unlike naan, this flatbread is thinner and more tender. 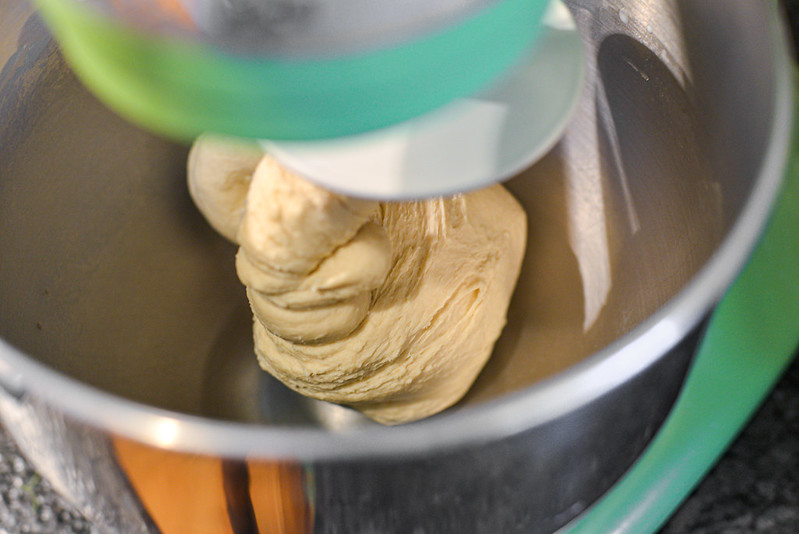 It's simple to put together with a stand mixer, which did all the kneading work for me in five minutes. It did take awhile for the dough to fully come together and become smooth, and I found that I needed to add a little more liquid after it got going for the dough to stick to the bottom of the bowl as it kneaded as the instructions said it should. 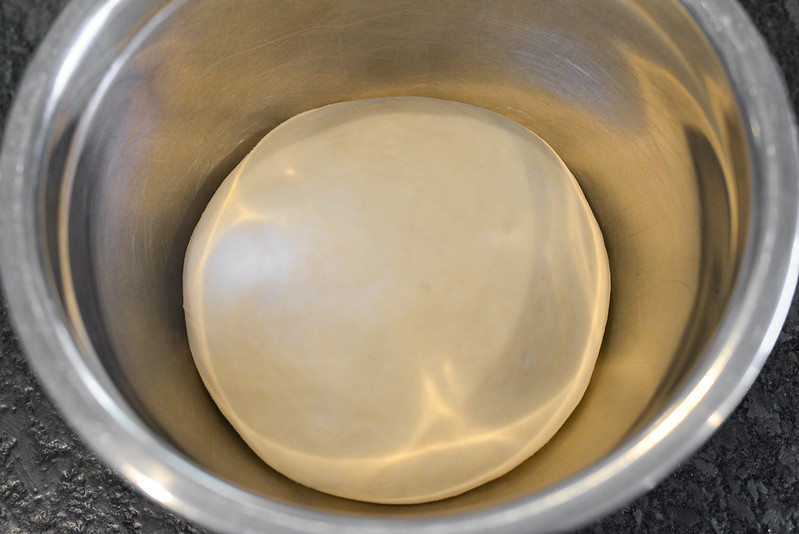 I've made this dough so many times before that I got nervous I did something horribly wrong this time when it hadn't risen much in the two hours after kneading. I almost started over, but instead gave it another 30 minutes, and in that time it began rising quickly, so the two hours in the recipe can definitely be give-or-take based on my experience and it's better to go by looks more than time. 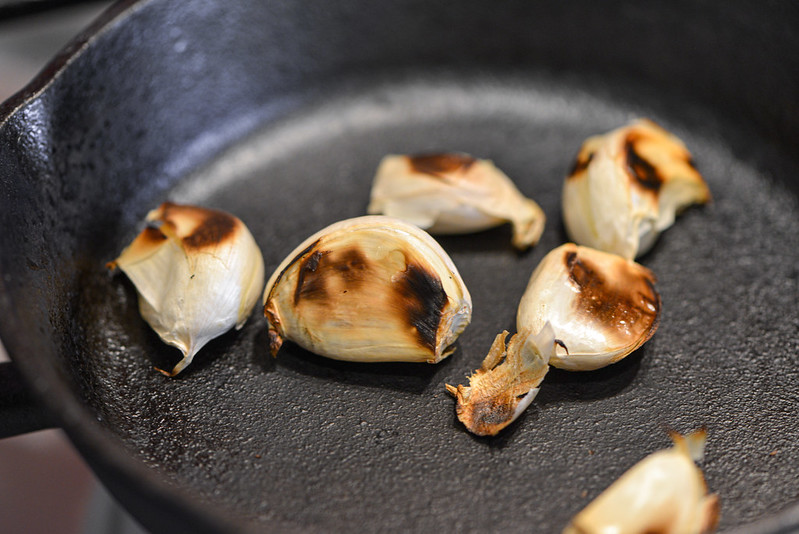 After the first rise, I divided the dough in six equal pieces and set it aside for the second rise, which is supposed to take about another two hours. It was during this downtime that I made the finishing sauce, which I played off the other items I was grilling that day and decided to do a garlic herb butter. I didn't want the sharp taste of raw garlic though, so I opted to toast a bunch of cloves first, which softens the garlic and takes that sharp edge off. 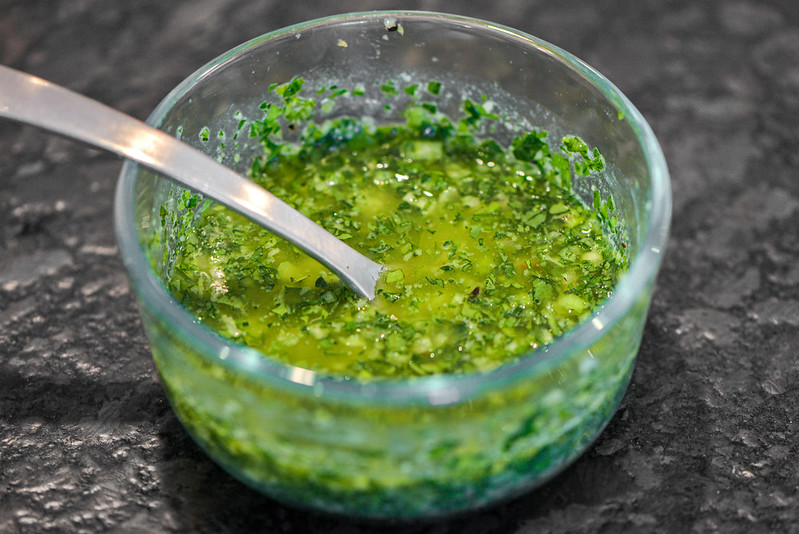 After peeling and finely mincing the cloves, I mixed them with melted butter and about a third of a cup of mixed herbs. I used cilantro, scallions, and parsley, which felt like it would be well suited with the meal I was prepping, but you can change up the herbs being used, and the quantities, based on whatever you'll be serving this with and your own personal tastes—the idea here is just to use a lot of herbs, the actual ones used can be variable. 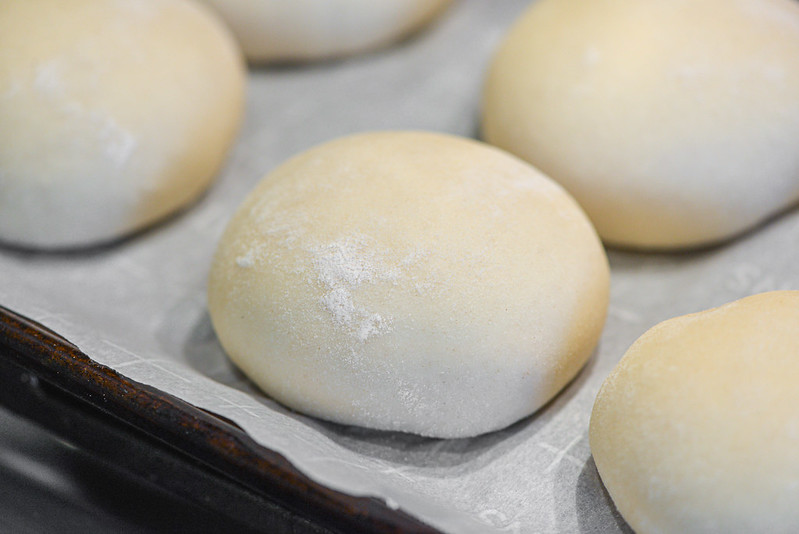 There were no issues with the second rise—the dough actually doubled in volume in about an hour and half. So with a little extra time on the first rise, and a little less on the second, I ended up with the total four hours I was originally expecting at the outset. 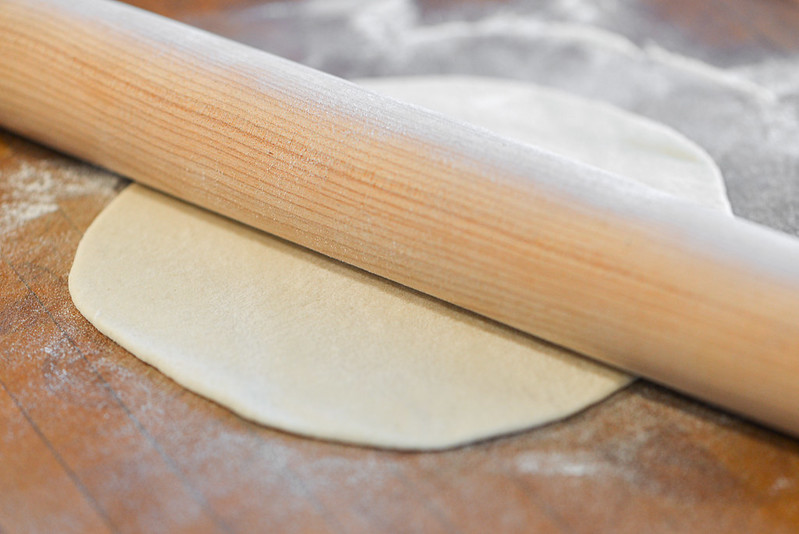 Going back to the naan comparison, one reason this bread is thinner is due to the fact that's it's rolled out instead of stretched, which results in a flatter and more even thickness. In order to grill all the bread quickly while the fire was at its hottest, I rolled out each piece into an eight-inch round while still in the kitchen, before heading outside to cook. 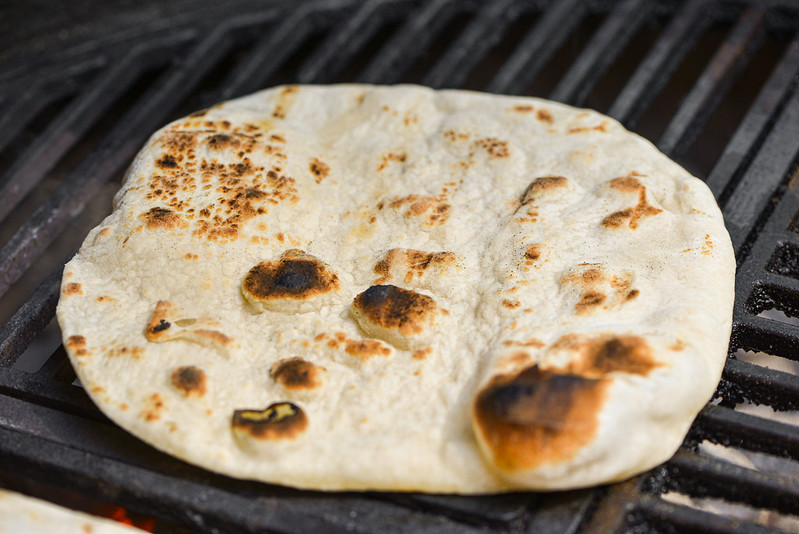 The thinness of this bread also means it cooks incredibly quick. It grills up the most tender and fluffy with a high heat fire, but that heat also means it can take less than a minute to cook per side. After I put a piece of dough on the grill, I flipped it once I saw bubbles beginning to form. There was usually some browning happening by that point, but not totally done yet. Once on the second side, most all pieces puffed up like a balloon, and after I saw that happen, I began flipping the bread back and forth often until each side was browned to my liking. 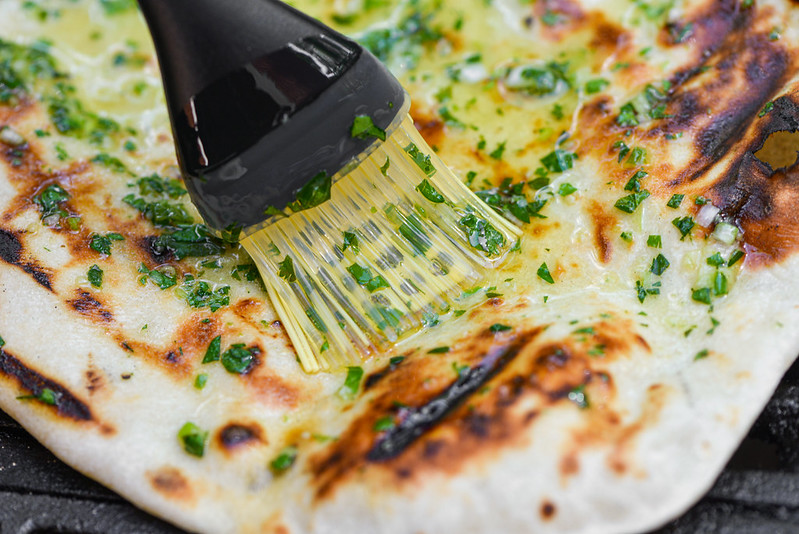 I then moved the bread to indirect heat and brushed on the garlic-herb butter. I wanted the bread to still be hot and remain heating a bit during this step to ensure the butter was well melted. My first couple pieces had a bit too much butter on them, so I scaled back the amount I was brushing on and also adjusted the recipe appropriately so you hopefully don't end up with any bread oversaturated in butter. 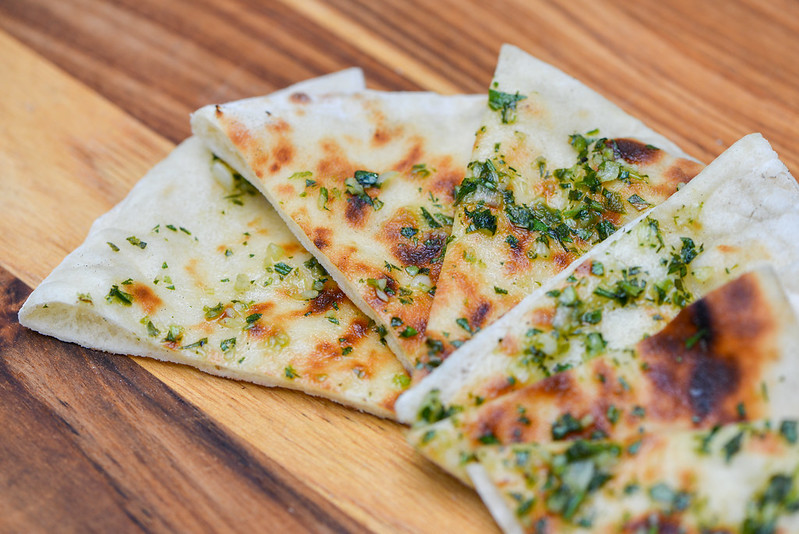 Now I can't say I found this as satisfying as za'atar bread, but it was definitely the right bread for the meal that day. As I've come to expect, the bread was light and tender and pretty irresistible when eating while still hot off the grill. The butter added more richness than I was used to, but it went well with the roasted garlic flavor, which gave a garlic bread-like taste. The herbs boosted the freshness and the scallions and cilantro in particular added a lot of flavor, but it also didn't really counteract the richness from the butter as I imagined they might do when first devising the recipe. All-in-all, this bread was suitably tasty and more-or-less satisfied a craving, but not enough that I probably won't being making a batch of my beloved za'atar bread in the near future. 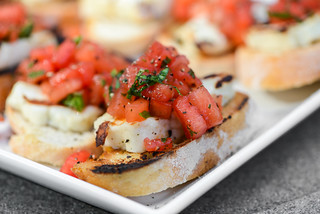 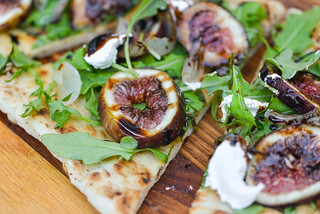