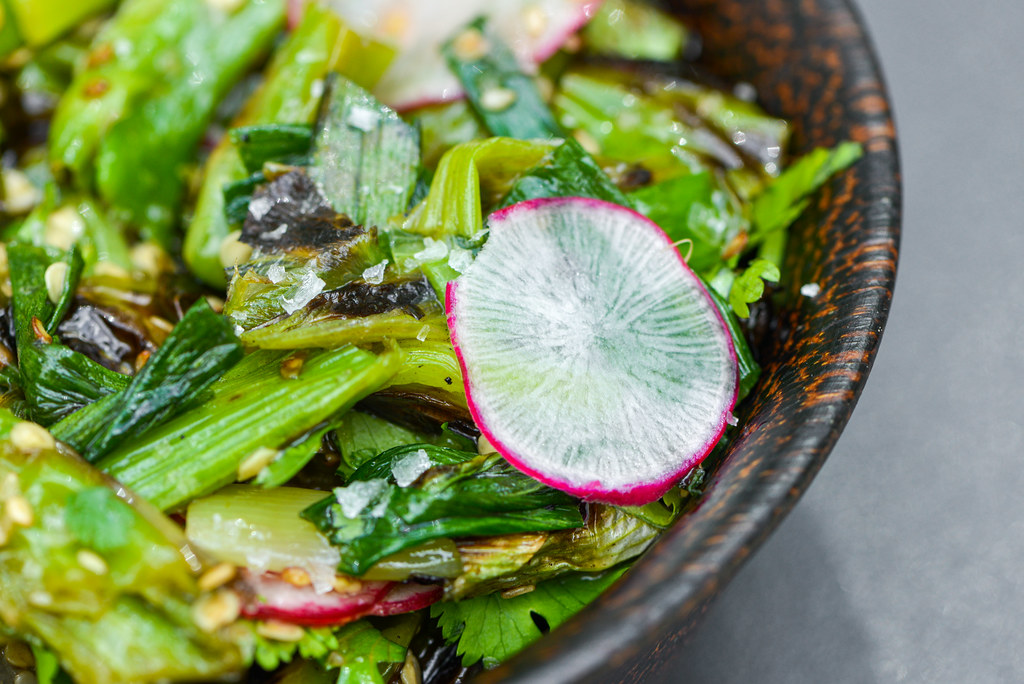 I've been on a mini-quest to find more ways to enjoy shishitos than solely on their own. So far I've put them in sandwiches and on skewers, but I've had an idea for a shishito salad bouncing around in my head without a totally clear idea of what it would consist of, so never developed a recipe for it. While my family was visiting this past Memorial Day weekend, my sister said some grilled shishitos would hit the spot as part of our Tiki-themed menu, and while at the grocery shopping for that, my shishito salad began to come into focus and I decided to give it a whirl. What I ended up making was pretty damn tasty, featuring a prominent grilled flavor by also including a large amount of fire-cooked scallions along with the peppers. 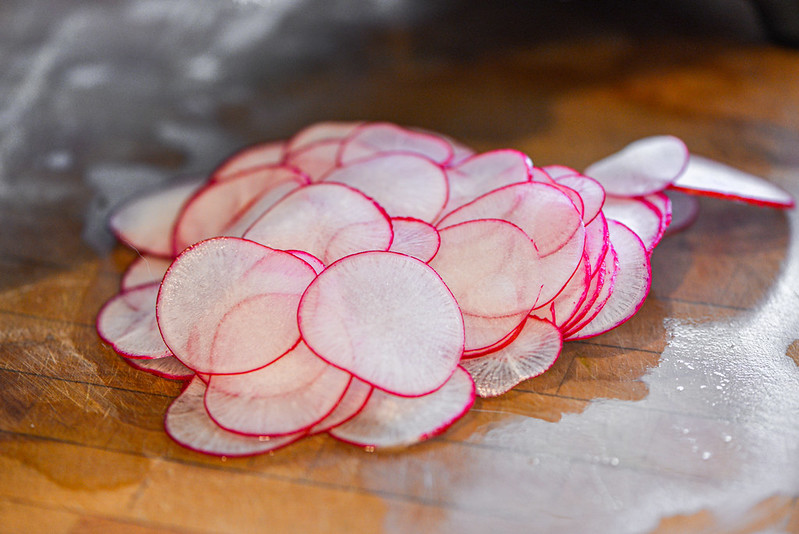 That scallion and shishito pairing is what came naturally to me, what took a bit more thinking was how to round out the salad and also what that right dressing would be. With both the scallions and shishitos being grilled, I wanted something to contrast those cooked elements with a freshness, crunch, and a pop of color. Staring at the wall of produce, radishes jumped out as the right thing to do that, and then I also grabbed cilantro to bring in an herbal component too. 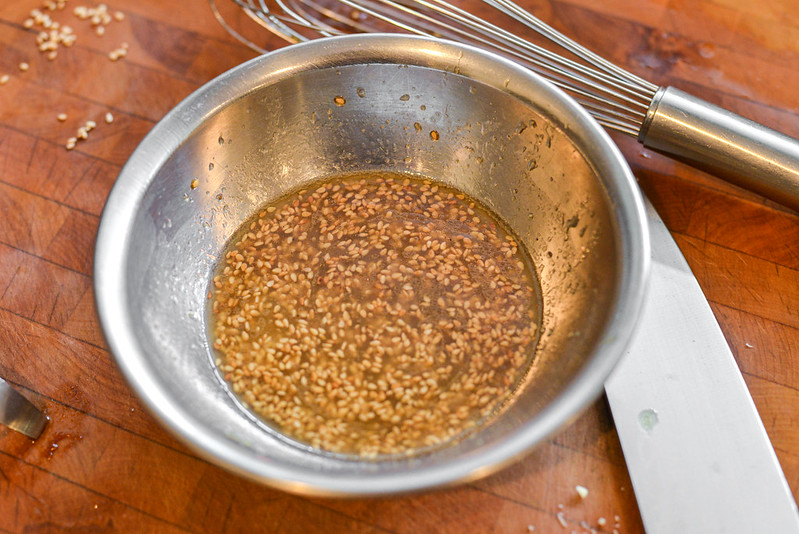 Then for the dressing, I took a cue fro a shishito preparation I previously did that I loved, which used a combo of sesame oil and lime juice to give the peppers a pop of citrusy brightness along with a toasty undertone that tasted very fitting with the fruity peppers. So I made a dressing that used lime juice as its base and built up complexity with soy sauce, sesame oil, garlic, and sesame seeds. After seasoning that with some salt and white pepper, it tasted like something was missing, so I added a little squeeze of honey and that did the trick. 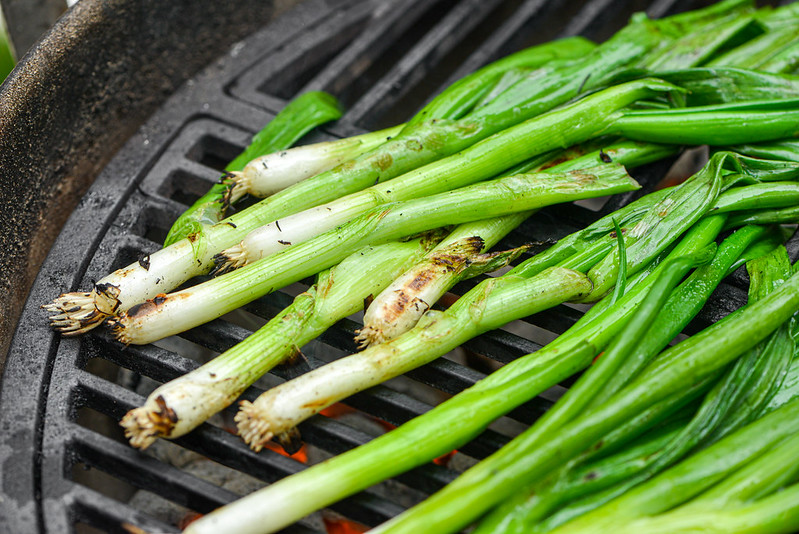 Now it was time to leave the kitchen and head to the grill. I had just removed a batch of wings from the fire and the heat was still pretty intense, so I made use of it to grill up the scallions and peppers, both which are very quick cooking. I started with the scallions, which I brushed lightly with oil and then grilled until until tender, but not overly charred. It should be obvious, but when grilling scallions, be sure to arrange them perpendicular to the grates so they don't fall through. 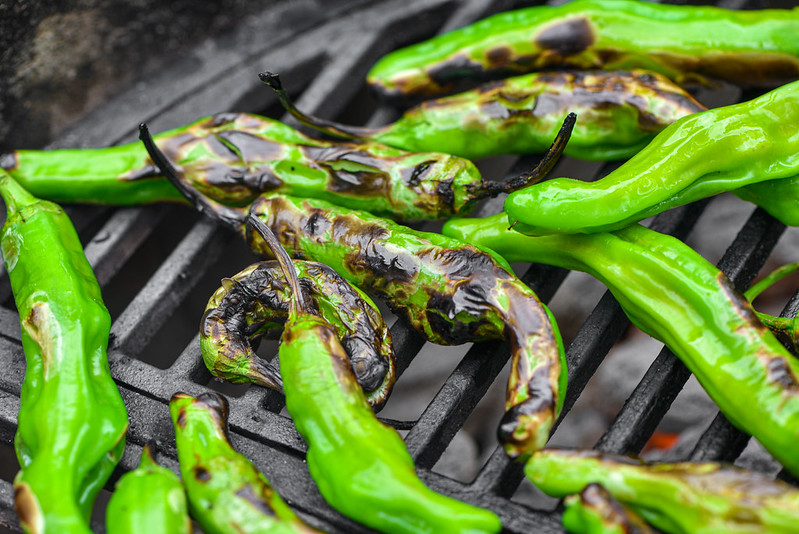 After transferring the scallions to a cutting board, I placed the oil-dressed shishitos directly over the fire and grill those until they were tender and well charred all over. They cooked quickly and at different rates, so as each was done, I moved it to the cutting board where the scallions were hanging out. 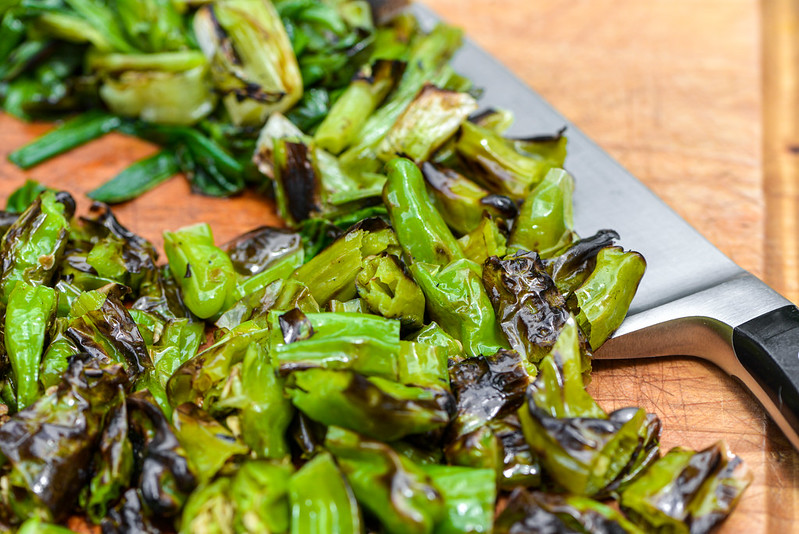 I wasn't quite sure how I wanted to serve the veggies in the salad—I thought leaving them mainly whole, minus the roots and stems, would make for good presentation, but not necessarily easy eating. So instead, I chopped both into roughly one-inch pieces, which I figured would provide good texture without the need to break the veggies into any smaller bites while consuming. 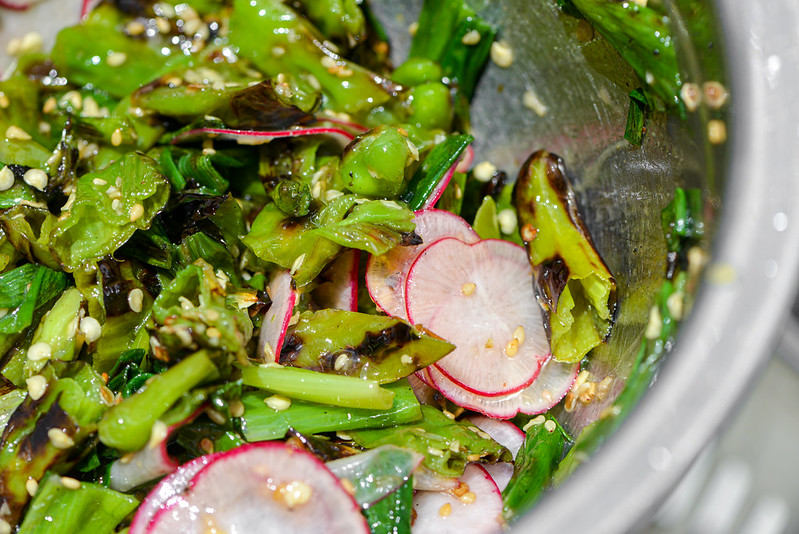 After chopping, I place the scallions and shishitos in a medium bowl, added in the radish slices and cilantro along with the dressing, and tossed to combine. I then transferred the salad to a bowl and served. 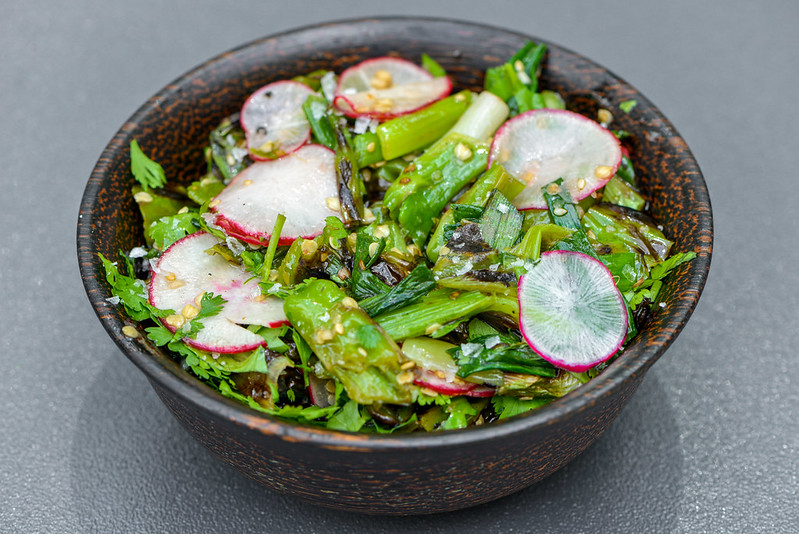 I had gone in a little too heavy on the dressing, but except for that fixable mishap, this turned out to be a solid and unique salad. Shishitos and scallions are both high up on my favorite grilled veggies list, so there's an obvious bias in my opinion, but I had three other eaters this day that were also digging the the way the fruity peppers were melding with the strong oniony and herbal components that also had a good tang and nuttiness too from the dressing. One thing I didn't consider from the outset was this salad was also going to be spicy—the standard saying is that one in ten shishitos will be spicy, but when you chop a bunch up and mix them together, just a few spicy peppers in the lot was enough to give almost every forkful of this salad a touch of heat. So it took me awhile to final figure out what a good shishito salad would be, and it kind of came together on a whim, but I was pretty pleased with how it came out. 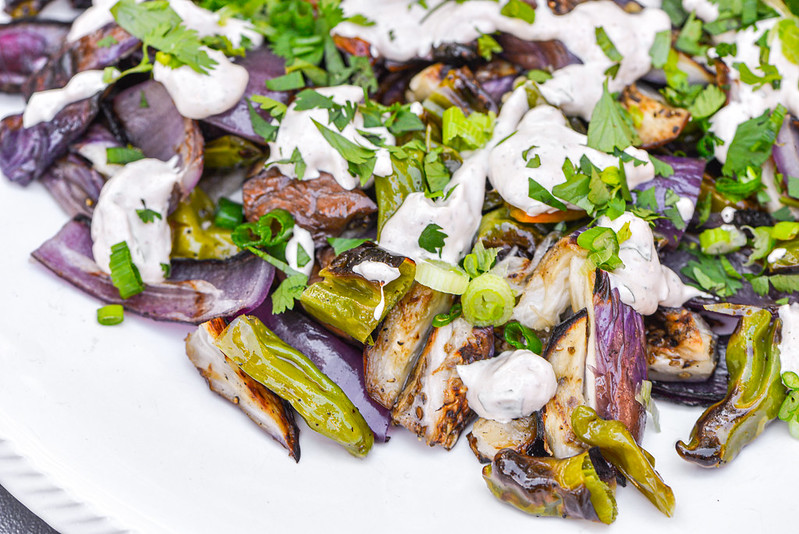 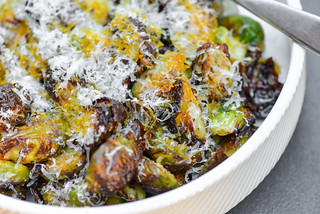