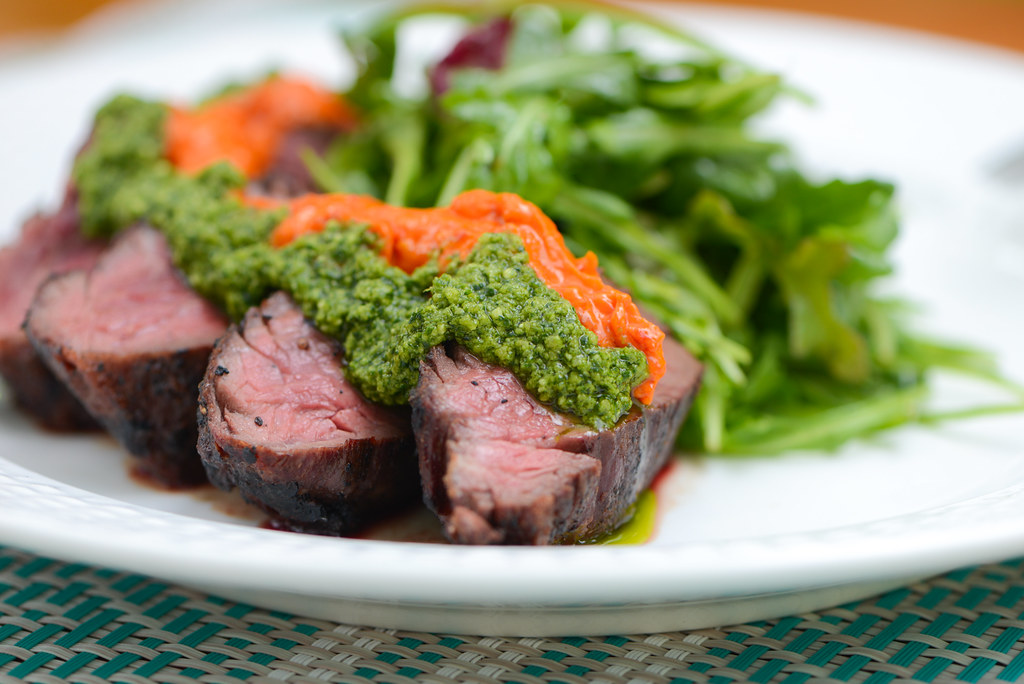 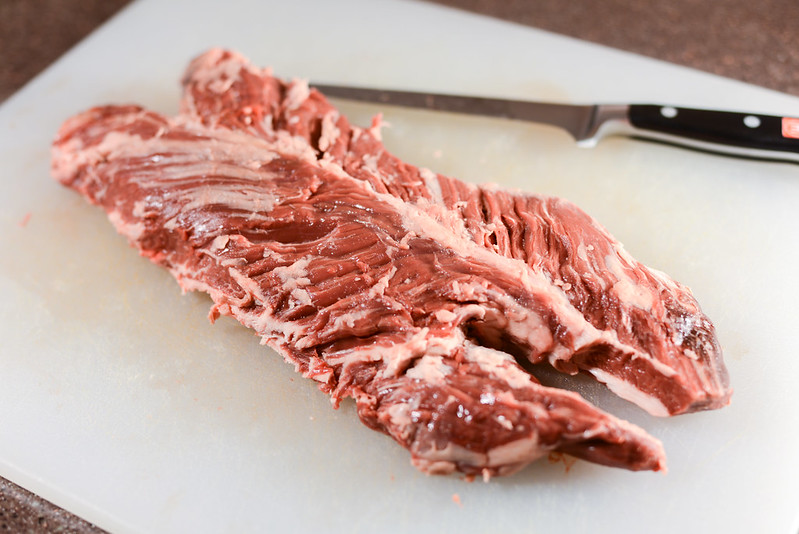 Hanger is my second favorite steak, sitting right behind the similar, but even more beefy and fatty, skirt steak. Hanger is cut from the plate of the cow and literally hangs off the diaphragm, hence the name and similarity skirt. Also like skirt, it's gained in popularity so it's not so inexpensive anymore, but compared to a porterhouse or ribeye, the value is great and the flavor can go head-to-head. 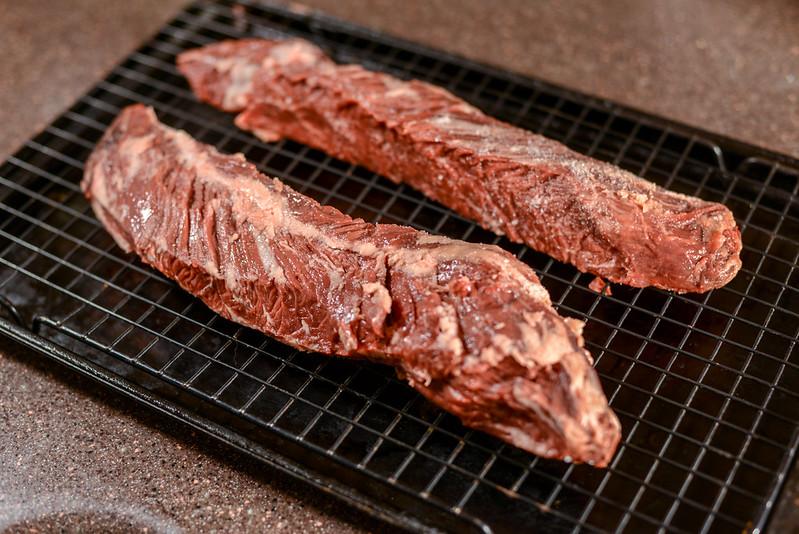 If you get the full cut, as I did here, the hanger comes with essentially two steaks that are divided by removing the large piece of fat that runs between them. As with any steak, flavor will improve if you give it a salting at least 40 minutes prior to cooking, which draws out moisture that is then reabsorbed, leading to some extra concentration in beefiness. 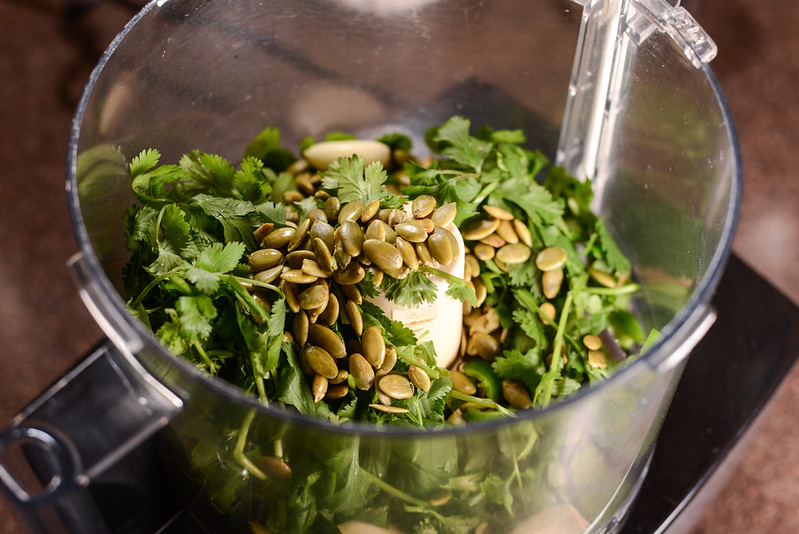 The idea to double up on the sauces came primarily from the desire to see how it would look for a photo. But in doing so, I had to consider what a good contrast would be to make each sauce have its own distinct flavor part to play, along with visual. This led me to choosing a green and fresh cilantro pesto to go with a red and spicy harissa butter. 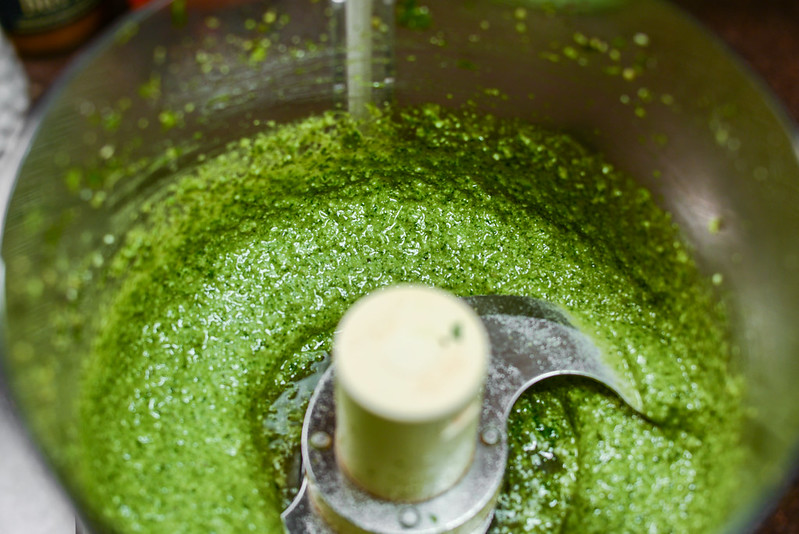 This pesto is a recipe I developed years ago for Serious Eats and basically subs out components of a traditional basil pesto with Mexican counterparts—cilantro for basil, pepitas for pine nuts, cotija for parmesan, and lime for lemon. The resulting sauce has a familiar fresh character, but with a totally different flavor profile that tastes as in sync as the time-tested basil variety. 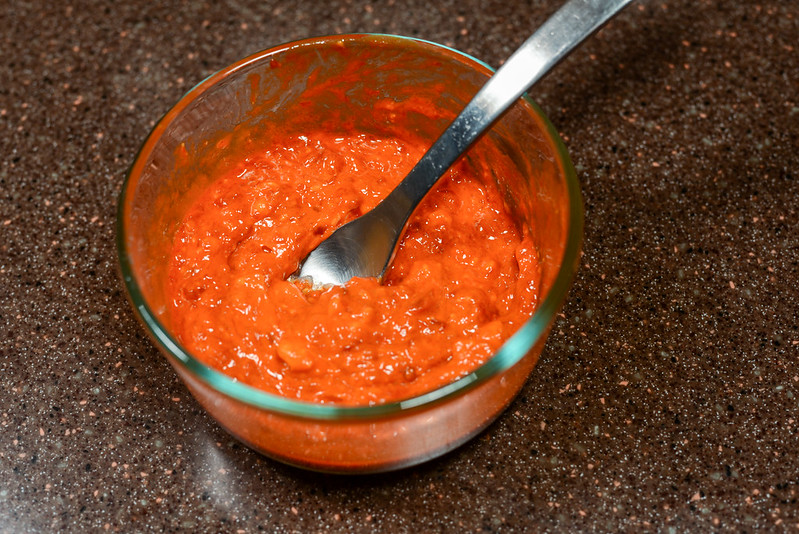 While the pesto isn't hard to put together, the harissa butter couldn't be easier—just mix harissa with softened butter. This North African pepper paste has such an immense hot peppery flavor, with earthy and sharp undertones, that the final sauce here needs no additional ingredients beyond the two to make it great. 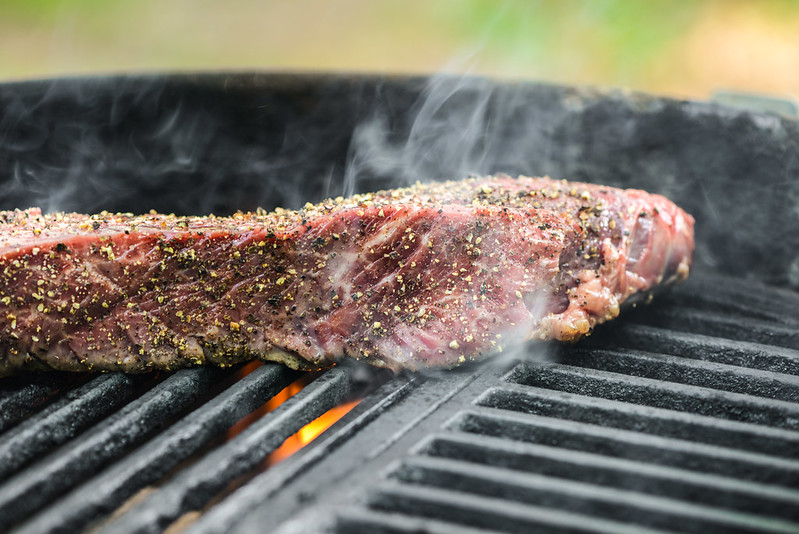 With the two sauces prepped and ready to go, it was time to get to grilling. As with skirt or flank, cooking is a similarly quick proposition. The goal is to get a deep crusty sear while keeping the inside a nice medium-rare—anything more and hanger starts to become too dry and chewy for its own good. So I started the steak off over a fresh batch of lit coals, searing it in minutes using the close to 700°F heat. 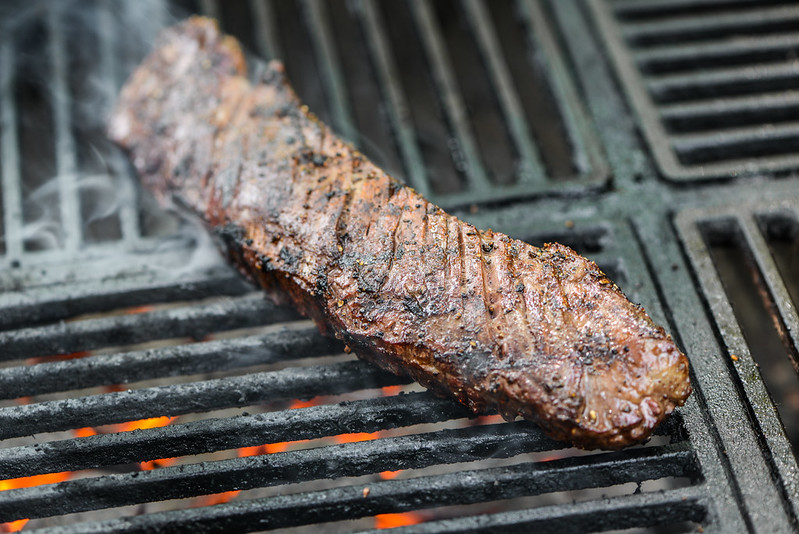 With skirt and flank though, their thinness usually means the beef is perfectly done by the time the quick sear is complete. Hanger, on the other hand, it a bit thicker, so it's good to have a two-zone fire to finish the steak up over indirect heat, covered, in case it hasn't hit your desired internal temp before it goes from ideally crusty to burnt. 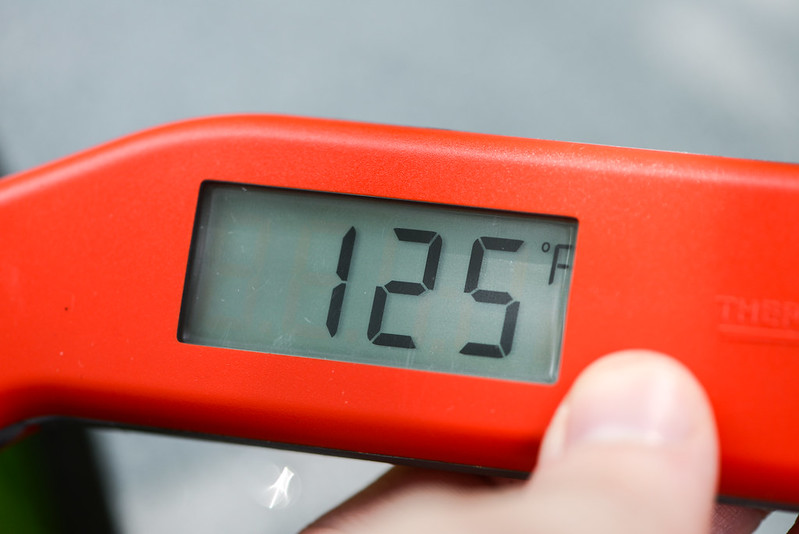 Luckily my steaks both reached 125°F just as they were seared to my liking, at which time I transferred them to a cutting board and let them rest for five minutes before slicing. 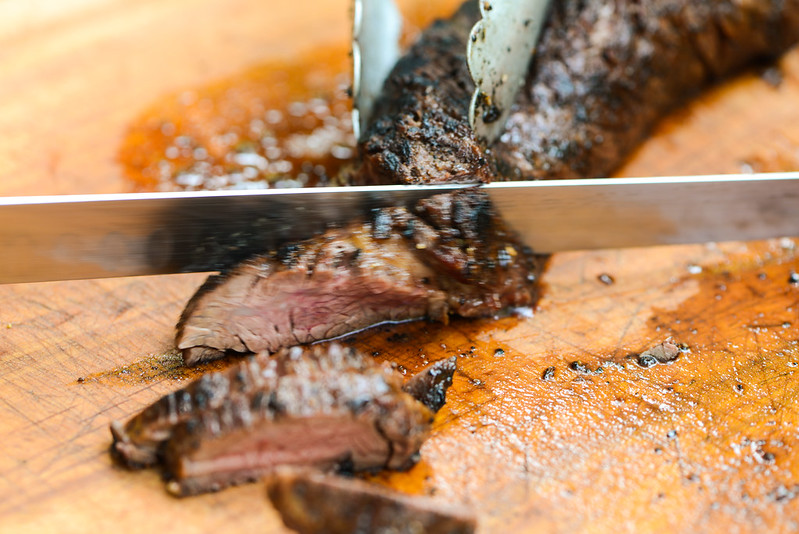 One requirement to make these inexpensive cuts perfect is to slice appropriately. Hanger has long fibers of meat that, when not cut into smaller pieces, create an overly chewy steak. So before starting to slice, I identified the grain pattern in the steak and then sliced against it. I cut the steak into pieces about one inch wide, but I think it would have been even better cut a little thinner. 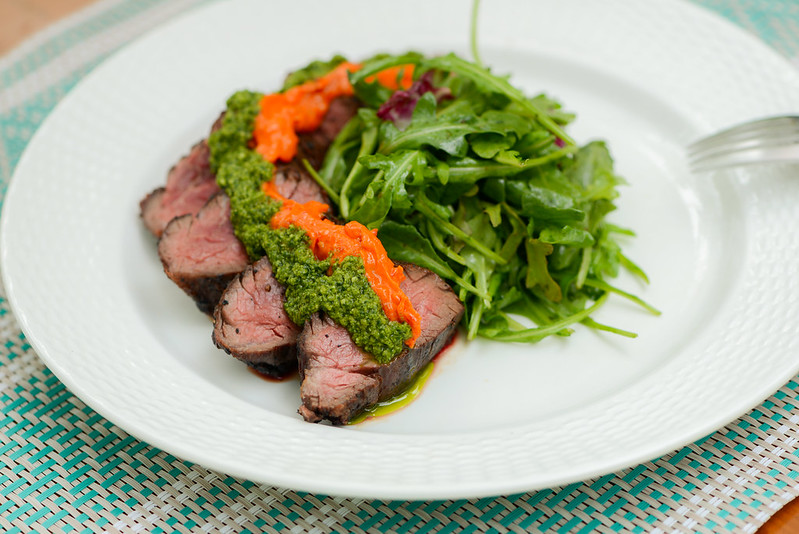 I then plated the steak with the sauces as nicely as I could—I'm trying to become better at food styling these days—snapped a few photos, and dug in. In my opinion, hanger needs no crutch, and the steak here was beefy with an excellent crusty, peppery exterior. The sauces, though, just enhanced the experience and played off each other as I hoped they would. The harissa butter added a rich and hot peppery flavor that was counteracted by the fitting fresh cilantro that also introduced a nice bit of saltiness to the party as well. So here's to this steak, and all red meat in general—at least until I get bitten by that horrible, no good tick, at which time I'll stop killing my self with excess beef and switch to doing it by basking in the fried chicken I'd still be able to enjoy (yes, I've already thought that far in advance).