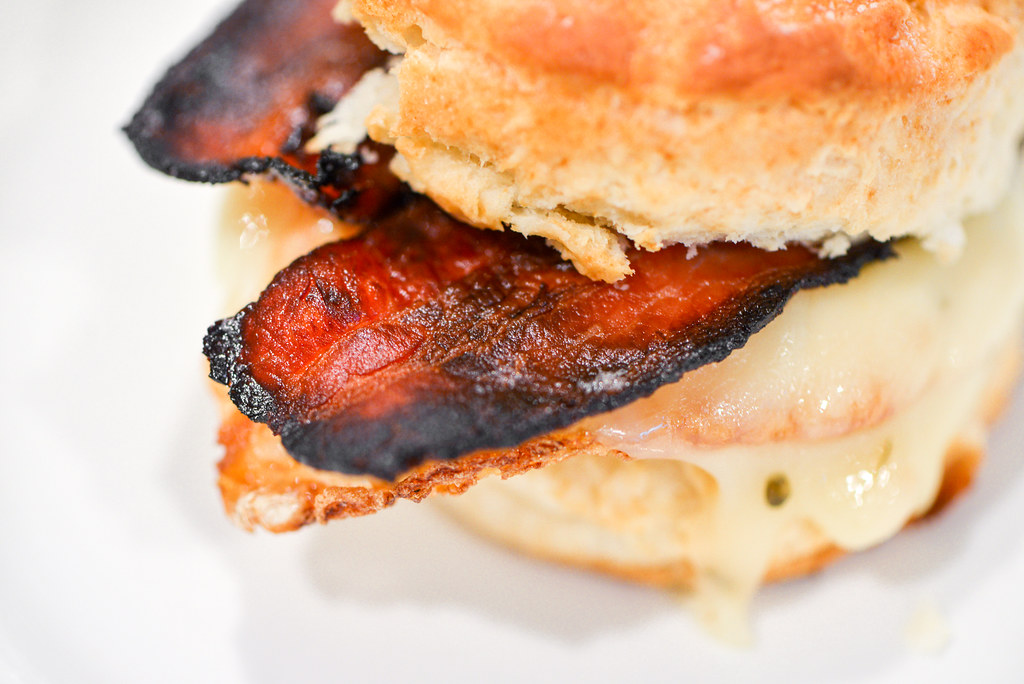 As my wing archive approaches 50 recipes deep, I imagine that one day my bacon recipes will fill out in a similar manner. That's because both wings and bacon represent two common traits—they're among my favorite things and present endless seasoning options. I thought after I covered the basic bacons, like maple and peppered, I would cool to new recipes, but instead the opposite is happening and I have new ideas constantly that I jot down in an idea log I maintain. One of those recent entries was for a honey-chipotle bacon which is a proven flavor pairing that sounded like it might just continue its delicious trend on some home cured and smoked pork belly. 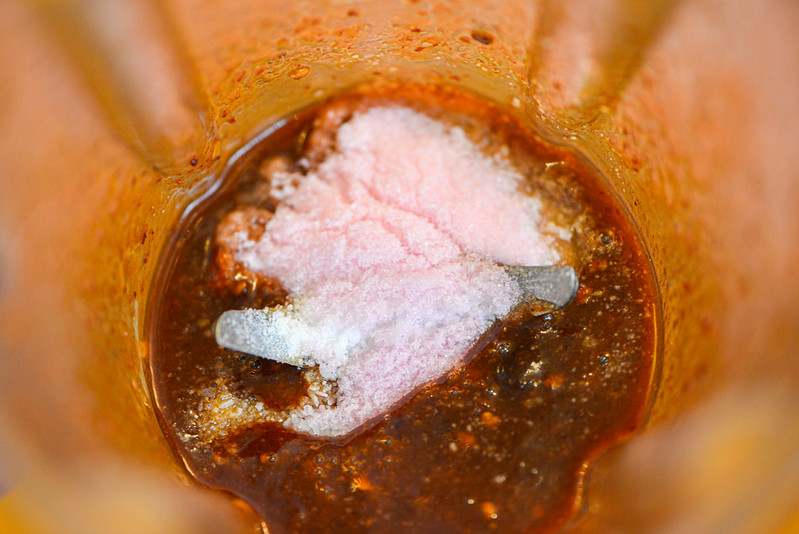 It's no coincidence that honey-chipotle was also part of my early wing exploration since this sweet, spicy, and smoky combo has been a favorite of mine for a long time, dating back to family meals at Chili's where this sauce adorned a chicken fingers plate I often ordered. It's really just an added bonus that a honey-chipotle sauce is incredibly easy to put together—merely put some honey, chipotles in adobo, and some of the adobo sauce in a blender and give it a whirl. To adapt this as a bacon cure, I only had to toss kosher and curing salts into that minimal mix. 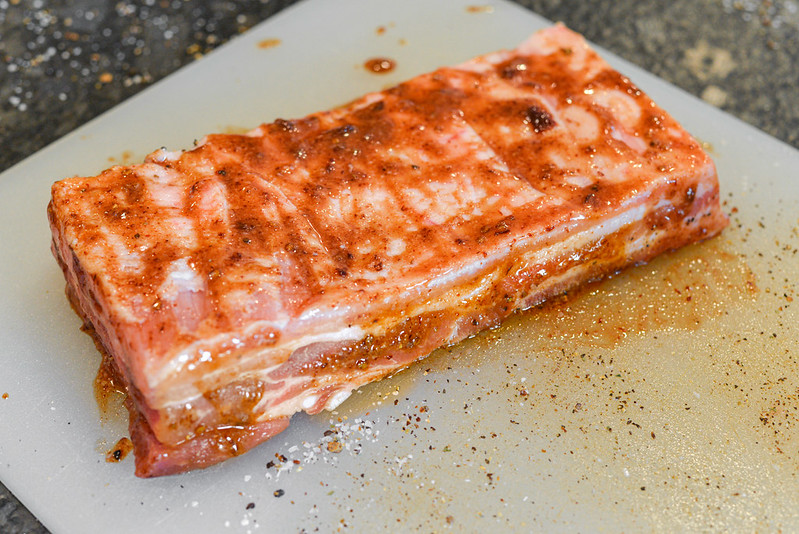 After pureeing those five ingredients until smooth in a blender, I then rubbed the sticky mixture all over a piece of boneless and skinless pork belly. While this may feel like it's a wet cure, it's still considered a dry one because the belly is not being submerged in a liquid brine. 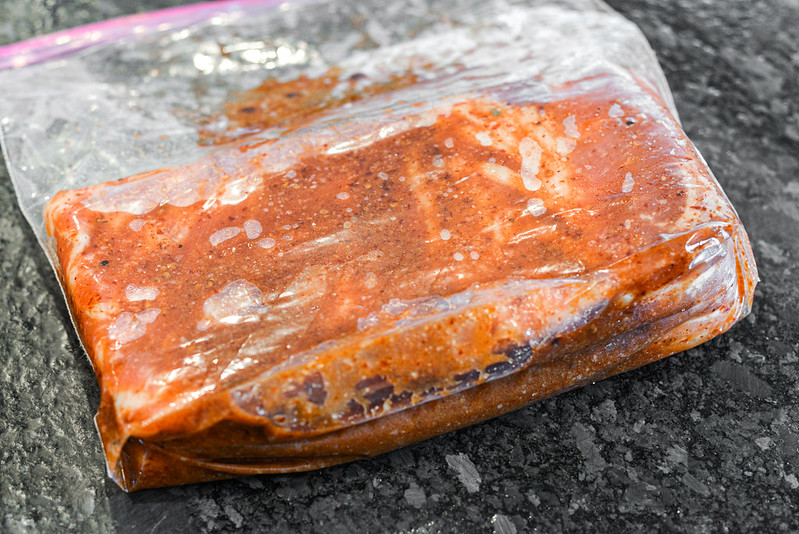 Next I transferred the piece of seasoned pork belly into a Ziploc bag and placed that in the fridge. And there it sat for a whole week, undistributed except for the once or twice a day when I flipped the bag over to ensure the belly was getting cured evenly throughout. 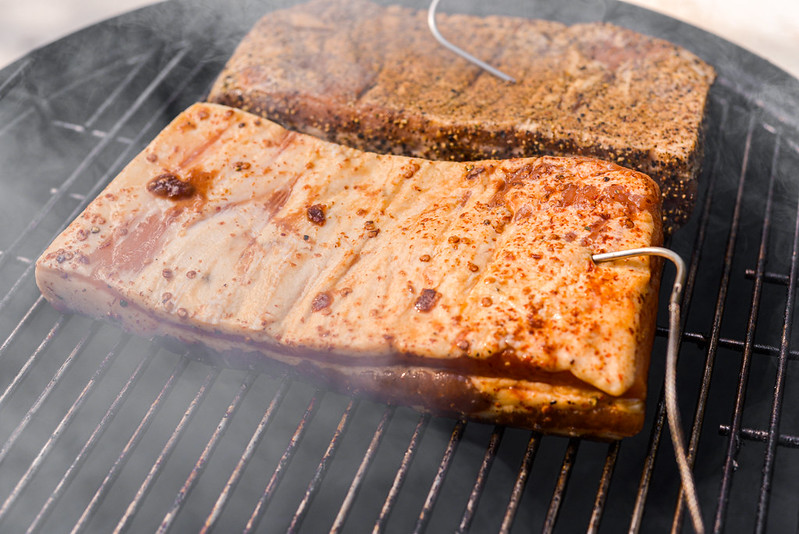 Seven days later, the pork that was in the bag still had that sticky, orange-hued coating, but the meat itself was significantly more firm, which is a tell tale sign that the cure did its thing. The pork then went into a smoker I had running at 225°F with a couple chunks of apple wood tossed on the fire. 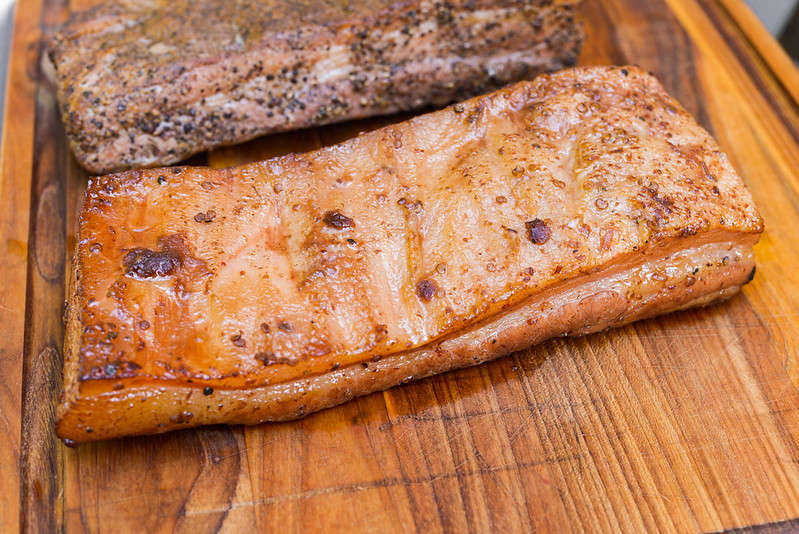 I let the meat smoke until the internal temperature registered 150°F on an instant read thermometer. This clocked in at one and half hours, which lined up with just about all bacons I've made to date. While I'll always go by temperature first, I feel very confident at this point of the time commitment smoking bacon will take, which is always a plus when planning my day. 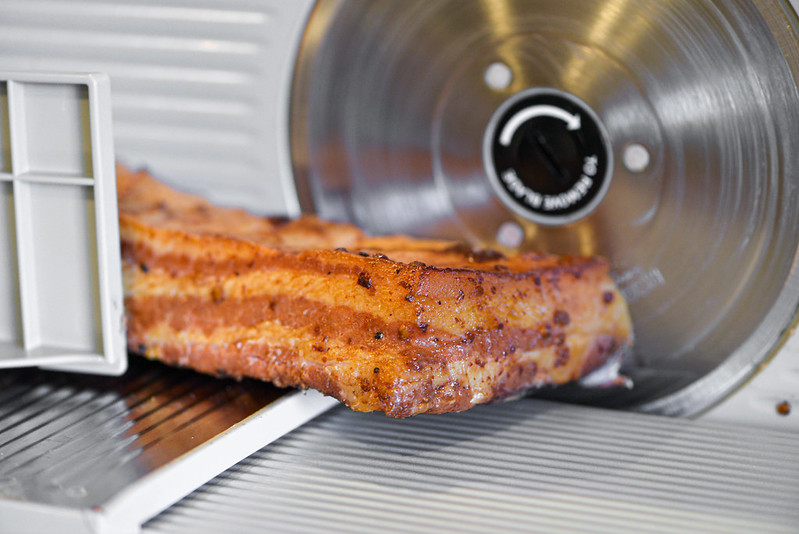 After wrapping the bacon in plastic wrap and letting it chill completely in the fridge, I got to slicing. I like to cut strips at home that are somewhere between the supermarket standard width and thick cut, finding going between the two gives me bacon sized well for most all applications. 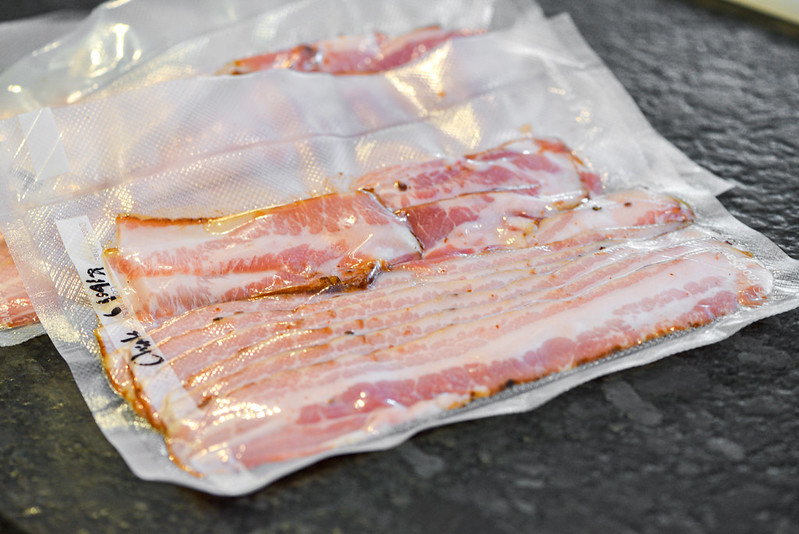 And that's a good thing to have when I don't actually know what all the bacon will be used for as I vacuum seal most of it and put in the freezer, defrosting as required whenever I need to use it. 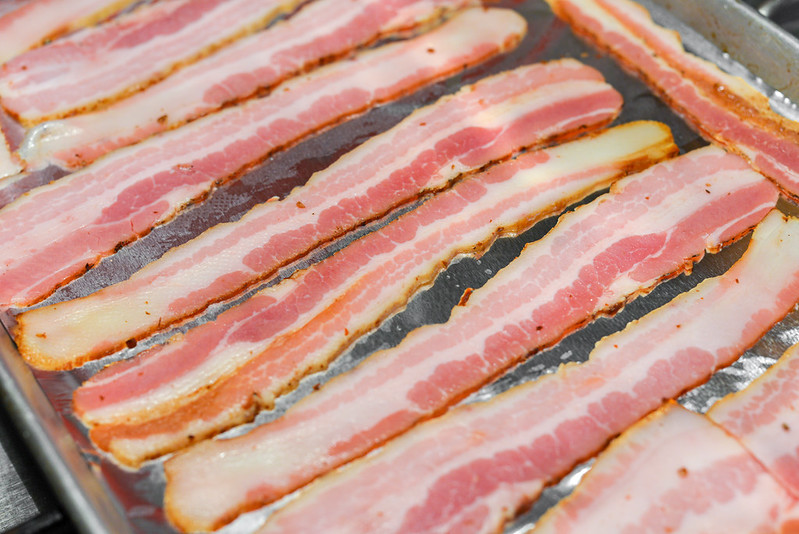 The first use of this honey-chipotle bacon was for biscuit sandwiches in the morning, then a fried chicken salad that same evening. I think every one of my bacon posts to date advocated for grilling bacon because, well, this is a grilling site. But that isn't always what do, and this time around I used my second favorite method—a sheet pan in a 400°F oven. This has many of the advantages that leads me to recommend the grill including: a large surface area to cook a lot at once, minimal mess, and reduced bacon smell in the kitchen when compared to cooking it stovetop. 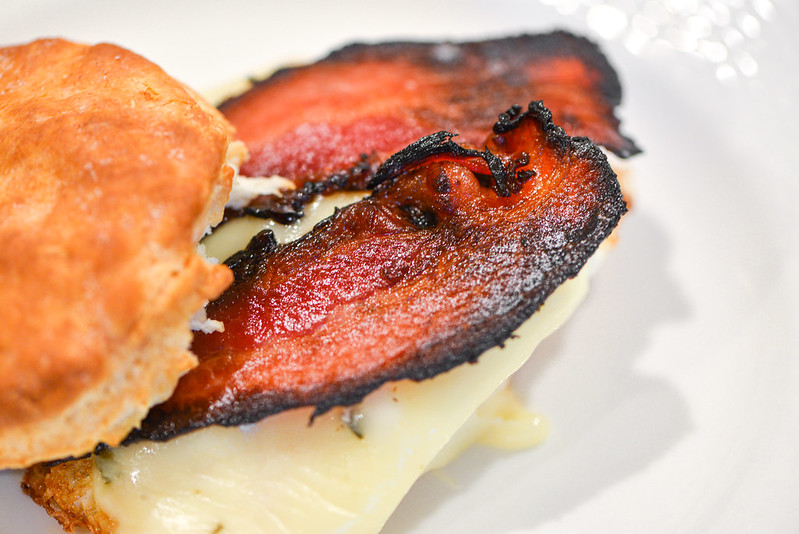 Just look how glorious that bacon is! One thing I didn't really consider when starting out was how quickly honey darkens and burns, which led to the edges of this bacon blackening more than others, but it did not taste burnt in the end. While the flavor of honey and chipotle wasn't as distinct as it would have been if using the sauce on wings or in other glazing applications, it did deliver that pleasing combo that started with some sweetness and then packed a good earthy and smoky heat. Another reason the honey-chipotle combo wasn't as prominent was the intense saltiness and flavor of the meat itself, which is the whole point of bacon to begin with, so that led me to deem this a success since I was able to taste everything from the cure and cooking process—salt, pork, smoke, honey, and chipotles. And so ends another bacon creation, leaving me just moving on to the next one in growing list that I foresee becoming quite substantial by the time I call it quits.