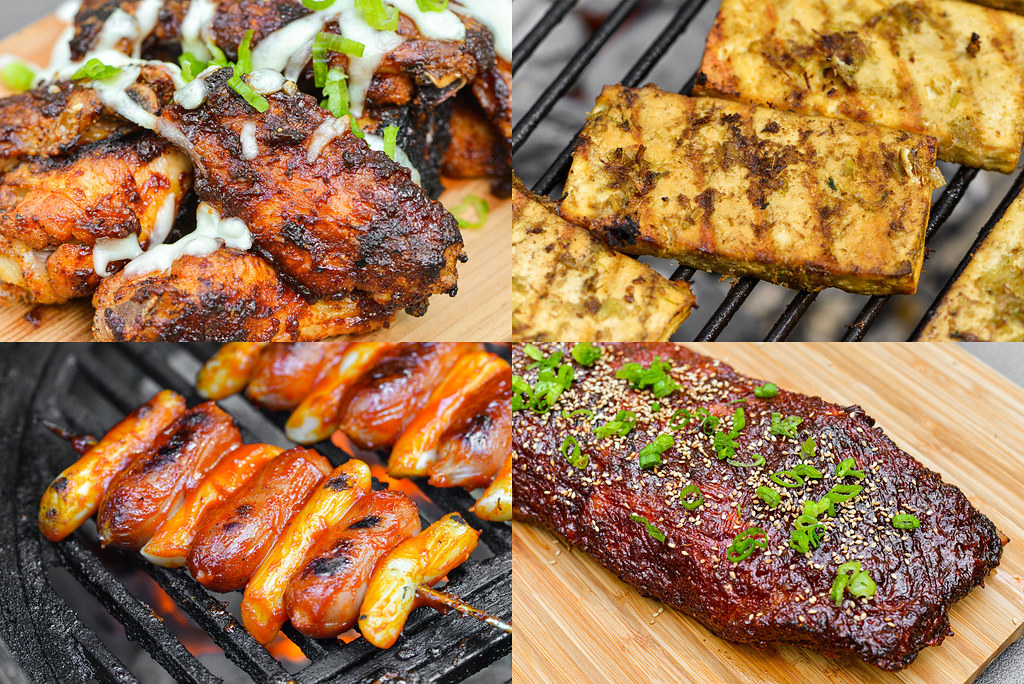 So I've been inching into Meatwave mode this season starting with more of a movie night than a Meatwave, then a cookout that was an immediate family reunion, and now a small-scale gathering that was the first I officially considered a "Meatwave." While this took place on the Fourth of July, it wasn't really a holiday cookout in the traditional sense, but the combination of great weather and a three day weekend made it a well suited day to test out how having a few more people in the backyard would work out after a year and half keeping distanced. Things went pretty well and I cooked up what I thought was a delicious spread that felt good to be able to share with friends once again, which is the whole reason I keep The Meatwave, and this website, going after so many years. 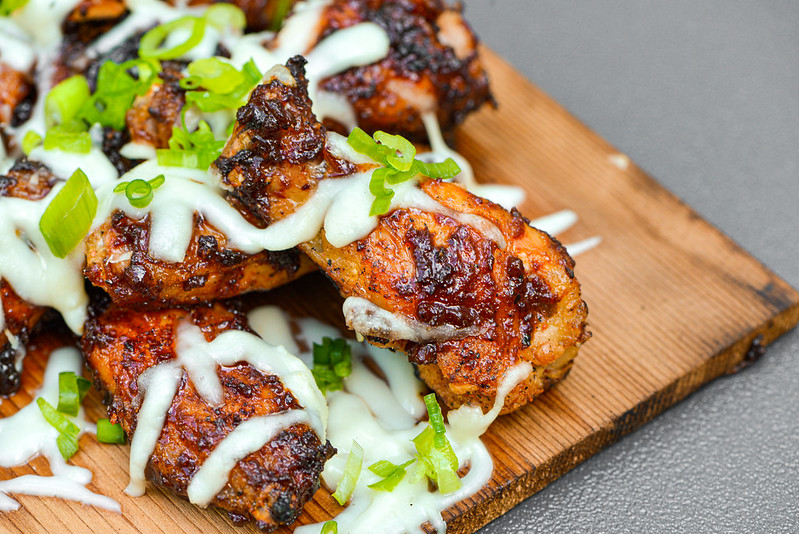 While I've never stopped cooking during the pandemic, the long dormancy has left me more flush with recipe ideas than usual and I had trouble deciding where to start. Initially my wife's family was considering a visit during the holiday weekend and I had already began planning a Korean cookout while they would have been here and had bought some ingredients for it and froze them after a run to H Mart. So that's how I landed with a menu that started with these fire chicken wings, which took a buldak recipe I tried out last year and applied it to wings. The results were just a satisfying with a great complex heat tempered by melted mozzerella. 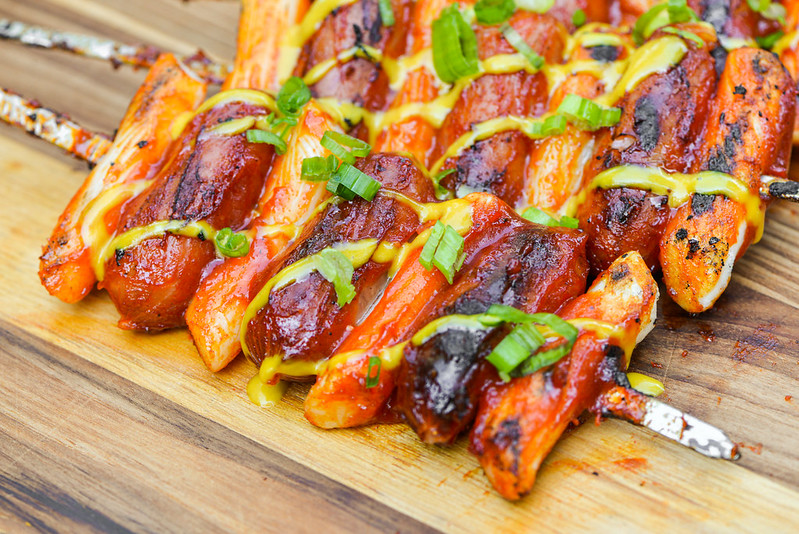 Next we had another appetizer of sorts with sotteok sotteok. It was the little Korean Vienna sausages that I had sitting in the freezer waiting to be defrosted and skewered with boiled rice cakes before being grilled and brushed with a spicy gochujang sauce and then finished with a drizzle of a sweet mustard. A few years ago I made something similar with just the rice cakes and loved it, so add little sausages into mix and I had some real serious eats on my hands. 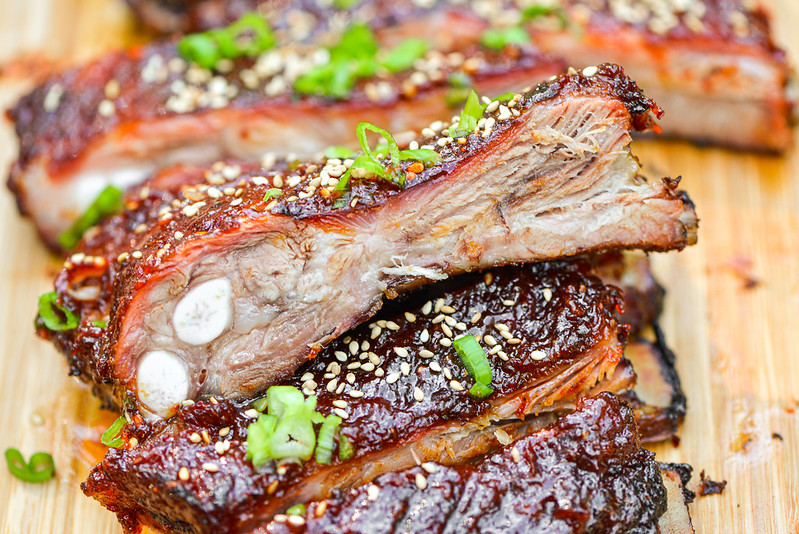 Can you ever have enough gochujang? I bet on the answer being no, which led me to also make gochujang ribs. The ribs here got a minimal sugar-based rub before being smoked and glazed with a pretty spicy, gochujang-heavy barbecue sauce that featured that fermented pepper flavor prominently with enough extra complexity to give it that American barbecue hallmark stamp as well. 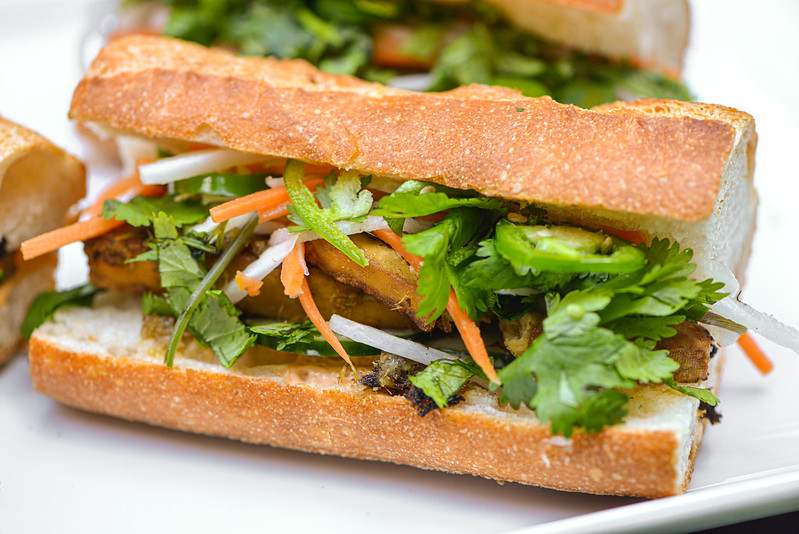 For the primary vegetarian offering, I moved away from the Korean theme and made a lemongrass tofu banh mi. I had been tiring of falling back on tofu for most of my vegetarian recipes before the pandemic, but it had been so long since I had an audience that this felt new and exciting to me. I used the base marinade for lemongrass pork chops, with soy sauce subbed for the fish sauce, and it worked really well, delivering a savory lemongrass taste that held its own with the other hearty sandwich toppers like a sriracha mayo, jalapeños, and pickled daikon and carrot. 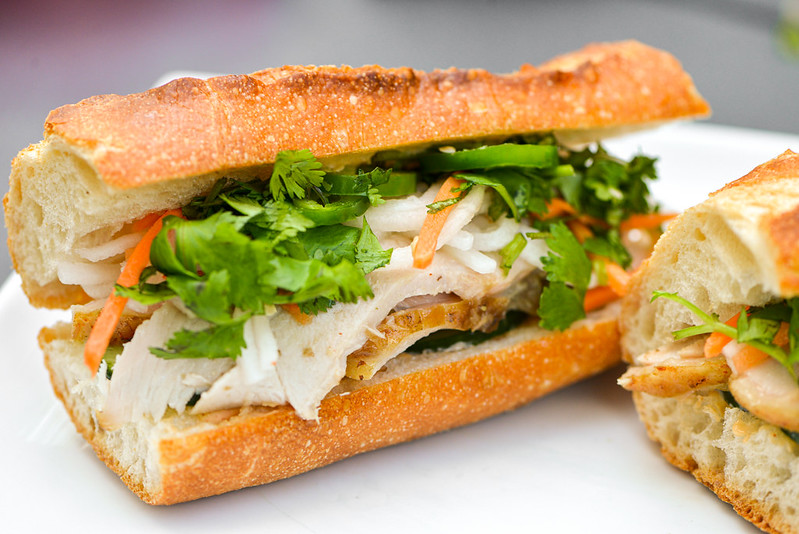 Wanting to keep the tofu reserved for those who would make it their main course, I also did a smoked turkey version of these sandwiches. I pretty much used the same marinade, but kept the fish sauce in this one, and that turkey turned out incredibly flavorful. It was excellent in the banh mi, but I loved it just as much sliced cold and used as regularly deli meat the next week too. 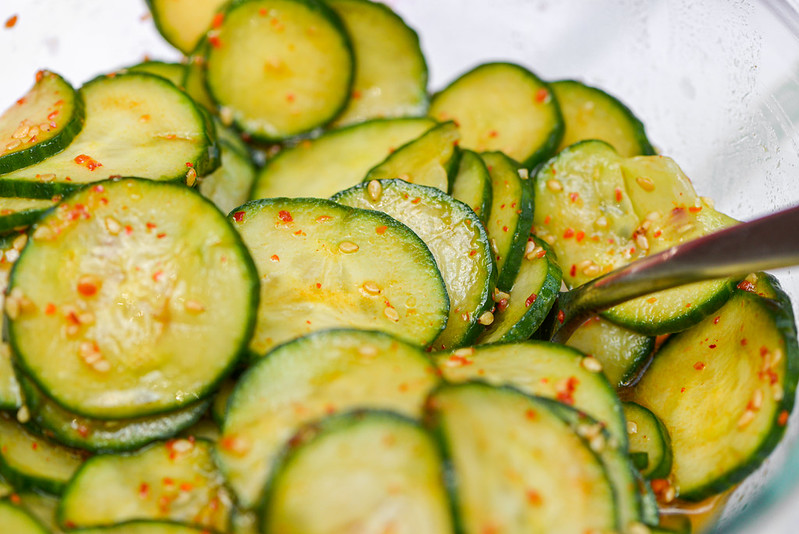 Being the first Meatwave back in action, I didn't have everything as together as I normally do and I actually forgot to put out all of the sides I had on hand. I did get this oi muchim—Korean spicy cucumber salad—on the table and it seemed to be a hit when I was left with an empty bowl at the end of the day, 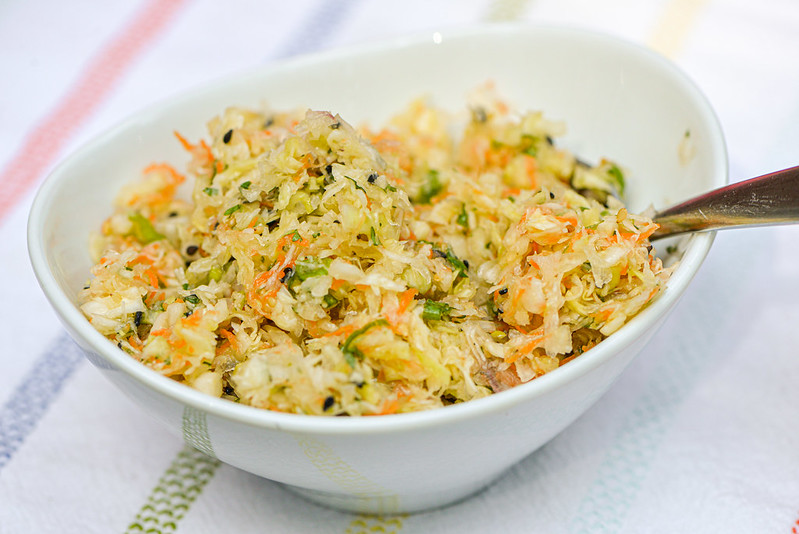 It was this sesame slaw that I actually got direct compliments on though, and this one I really just threw together on a whim. I picked up a head of cabbage and some carrots, then devised a dressing as I went along that was simply rice vinegar, sugar, sesame oil, and sesame seeds. That definitely delivered a flavor that was very fitting with the menu overall. 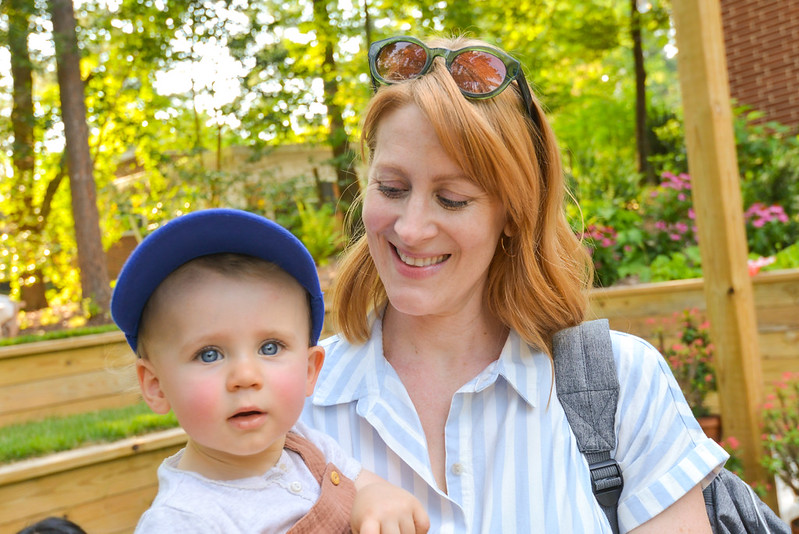 I also lagged on the people photos, so there was a slightly larger crew than what you'll see here, but I still wanted to shout out some of the folks that made this a memorable day starting with Lindsey and Kai, who was attending his very first Meatwave. 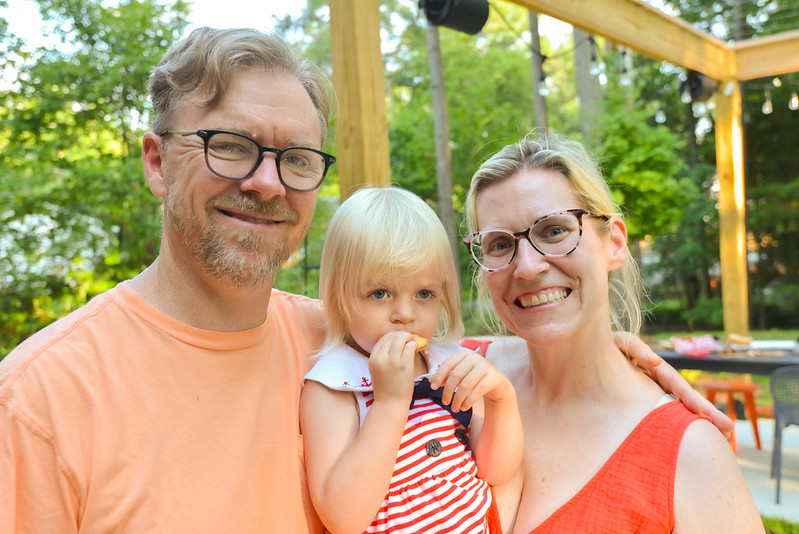 Then we have regulars Steve and Leslie with their kiddo Brooks, who did a lot of growing since the last time we saw her. 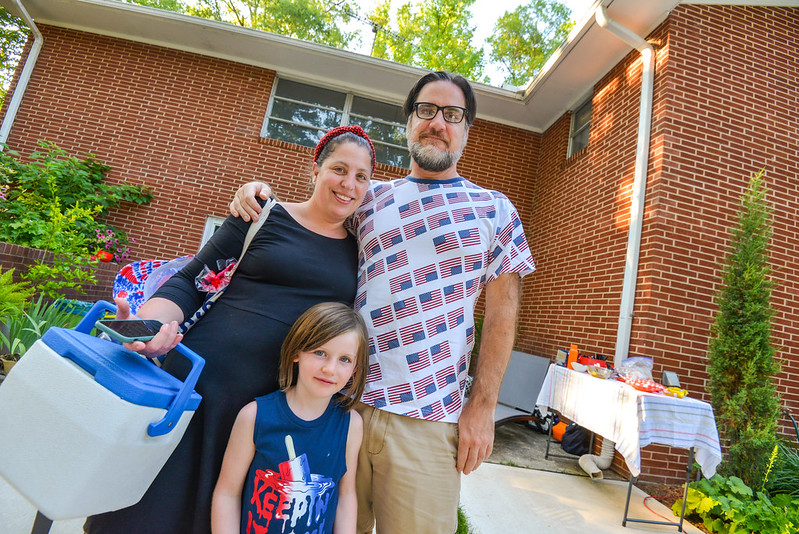 And finally Chris, Lindsay, and Alice, who came home early from being away just to make it to The Meatwave. They also came with a comically large bag of pistachios that I am now the proud owner of.

Sorry for all I missed getting documented proof of attendance, and a world of thanks for all the great desserts and sides people contributed too. I'm hoping to keep some semblance of the Meatwave going this summer. Whether we return to older times is still a question, but there's still a lot of folks we haven't seen and would love to have over for the type of good food and company we were grateful to enjoy on this past holiday weekend.